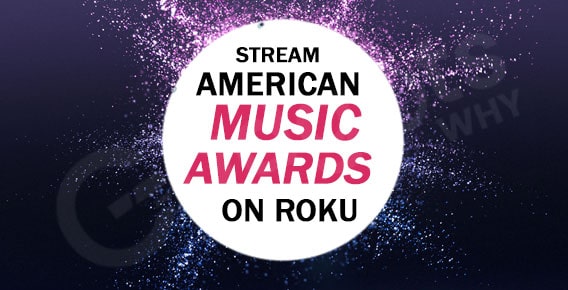 On Sunday, November 21, at 8:00 p.m. ET/7:00 p.m. Central Time, ABC will broadcast the 49th Annual American Music Awards live. The American Music Awards, hosted by Cardi B this year, highlight performers from various genres and recognize overall New Artist of the Year and Song of the Year. Pop, Hip Hop, R&B, Country, Latin, Rock, and Inspirational artists and songs will be honoured. In addition, there will be around a dozen live acts during the ceremony. Ariana Grande, BTS, Drake, Olivia Rodrigo (also nominated for New Artist), Taylor Swift, and The Weeknd are among the musicians nominated for Artists of the Year this year. Continue reading to learn how to watch the 49th Annual American Music Awards live on your Roku without cable.

About the American Music Awards

The American Music Awards (AMAs) are an annual American music awards event held in the fall that was conceived by Dick Clark in 1973 for ABC when the network’s contract to broadcast the Grammy Awards expired. From 1973 until 2005, winners and nominees were chosen by members of the music industry based on commercial success, such as sales and airplay. Since 2006, winners have been decided by a vote of the general public and fans, who can cast their ballots via the AMAs website.

The American Music Awards were broadcasted live from Los Angeles’ Microsoft Theater on 21st November 2021 at 8 p.m. ET/PT on ABC.

Rodrigo and the Weeknd received the most nominations, each receiving seven and six nods. Each of Bad Bunny, Doja Cat, and Giveon received five nominations. Fans vote on the show’s winners, and new categories this year include most trending song, favourite gospel performer, and favourite Latin duo or group.

BTS was named artist of the year, as well as favourite pop pair or group and favourite pop song, for their single “Butter.” Megan Thee Stallion also took home three awards for “Body,” including favourite trending song, female hip-hop artist, and hip-hop album. Doja Cat took home the same number of awards, taking home collaboration of the year for her collaboration with SZA on “Kiss Me More,” as well as favourite female R&B artist and R&B album for “Planet Her.” Meanwhile, Rodrigo was named new artist of the year.

Below is a live update of all the night’s winners.

How to stream the 49th American Music Awards 2021 on your Roku?

Follow these steps to watch the 49th Annual American Music Awards on Roku.

Watch the 49th American Music Awards on your preferred streaming device, via these streaming services

Fans will have a variety of ways to stream America’s best acts without having to spend a bunch. ABC has the streaming rights for American Music Awards. It is available on most major subscription live TV streaming platforms, so fans can watch the award show from anywhere.

The ceremony will also be streamed on ABC’s website the next day.

These are the different ways to watch the American Music Awards on Roku. The AMAs are broadcast in over 120 countries and territories around the world. It also hosts unique world premieres of songs ranging from Pop to Rap to K-Pop to Latin and beyond, with some of the world’s biggest names in the industry. You may keep up with AMAs by following them on Facebook, Twitter, Instagram, and other social media platforms, or by visiting websites such as theamas.com and ABC.com. Thanks for staying with us till the end and we will see you in the next one!