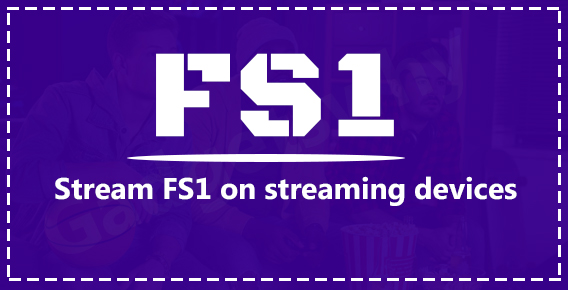 How to Stream FS1 on different devices to manifest your sports love?

Home » How to Stream FS1 on different devices to manifest your sports love?

For many sports lovers, Fox Sports 1 (FS1) has become a must-have. Live sports programming is available on FS1 and FS2, including NASCAR, college football, and MLB events. We have recently discovered that in the spring of 2020, certain XFL games would stream on FS1. FS1 was formerly exclusively available via cable. That is no longer the case! You may now obtain it for a fraction of the cost of a cable or satellite subscription. Continue reading to find out more! Major League Baseball, college sports, soccer matches (including Liga MX, Major League Soccer, and Copa Libertadores), USGA championship events, combat sports, and a variety of motorsports events are all broadcast live on FS1.

In order to Add and Stream FS1 on your streaming device, you have to follow the instructions till the end. You will get to have multiple options to choose from according to your comfort.

Without Cable, How can you Stream FS1 on your streaming device?

It isn’t available over the air, hence it isn’t available. Unlike its parent station, Fox, you can’t watch it for free with an antenna. Using a streaming service is the only way to see it without cable. There are several advantages to using streaming services. The most important factor is cost. They are less expensive than similar cable bundles. Most also come with DVRs, which let you schedule and live record movies, programs, and events.

Streaming services are also more user-friendly than ever before. They feature interfaces that are familiar to cable customers, including channel guide listings and search options. Other interfaces that cable companies often do not supply are also included. Finally, streaming services are available on about every device imaginable, including televisions, smartphones, and gaming consoles. Here are the options you can choose from in order to stream FS1 on the streaming device.

Since FuboTV began as a sports streaming service, it includes FS1 in its base plan, which costs $64.99 per month. FS2, ESPN, ESPN2, and NBCSN are also available. It also gives you access to regional sports networks (RSNs), allowing you to watch local MLB, NBA, and MLS teams. FuboTV has more than 110 channels in total. There are 38 of them that are sports-related. They do, however, have a great range of channels, including all of the local network affiliates in most areas, as well as staples like AMC, Hallmark, and Nat Geo.

Sling TV is a low-cost streaming service that provides a lot of value. Sling Blue costs $35 per month and includes 40+ channels, including FS1. You’ll also have access to the NFL Network! You’ll need to combine the Blue package with Sling Orange if you want ESPN. For a total of $50 each month, you’ll get 50+ channels. Sling TV also has a number of add-ons that let you customize your channel lineup to your liking. The primary disadvantage of Sling TV is that it only offers Fox and NBC local affiliates. You’ll need an antenna if you want to watch ABC and CBS. Sling has a unique deal that gives you one for free if you pay for two months in advance.

Vidgo is another low-cost streaming service that charges $55 a month for 95+ channels. With FS1, FS2, ESPN, ESPN2, 6 Pac-12 stations, and not just the NFL Network but also NFL RedZone, you get a lot of sports! They also provide a variety of news and entertainment programs, including three Disney channels and the top three cable news networks. All of this comes at the expense of CBS and NBC’s local affiliates. You do, however, have access to ABC and Fox!

For $69.99 per month, DirecTV Stream offers FS1 as part of its basic package. ESPN and ESPN2 are also included. If you want to play FS2, you’ll need to subscribe to the Ultimate Package, which costs $94.99 a month. However, there is a reason why you would wish to do so! All DirecTV Stream plans, starting at Choice ($84.99/mo), provide access to RSN. They also offer the largest selection. It’s a long way off. DirecTV Stream is the way to go if you’re a fan of the local baseball or basketball club.

What programs are available on FS1?

The following are a list of FS1’s sports programming:

You are all done. You have multiple options now to stream FS1 on your streaming device. You can select anyone you want, basically which is suitable for you.