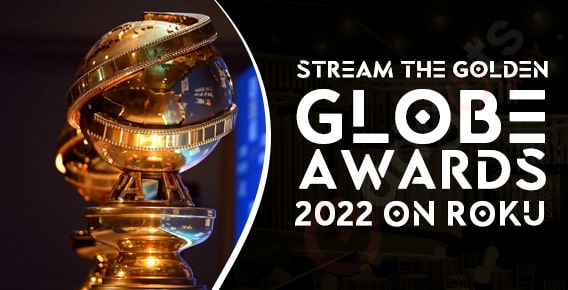 Guide to stream the Golden Globe Awards 2022 on Roku

Home » Guide to stream the Golden Globe Awards 2022 on Roku

About the Golden Globe Awards

The Hollywood Foreign Press Association (HFPA) presents the Golden Globe Award each year in celebration of exceptional performance in motion films and television during the preceding year. The Golden Globes are second in prominence to the Academy Awards (for cinema) and the Emmy Awards (for television) in the entertainment business, and the televised awards ceremony is a similarly opulent occasion.

Golden Globes are awarded in a variety of categories for each medium. Best motion picture, best actor, and best actress are among the film awards, which are divided into “drama” and “comedy or musical” categories. Supporting acting, directing, scripting, music, animated pictures, and foreign-language films are all recognized. Drama series, comedy or musical series, miniseries or movies, as well as acting performances in each genre or format, are among the television awards. Members of the HFPA cast ballots to decide a slate of candidates and, in most cases, a single winner in each category for all competitive awards. The Cecil B. DeMille Award, an award for lifetime accomplishment, is also given out most years. Golden Globe winners are honored with a trophy that features a globe ringed by a strip of films.

The awards were first presented in 1944 by the newly created Hollywood Foreign Correspondents Association, a group of entertainment journalists located in Los Angeles who write for newspapers outside of the United States. It was renamed the HFPA in 1955, following the reincorporation of a short-lived splinter party. The next year, the Golden Globe Awards, which had previously solely honored motion movies, included the first television awards. In the mid-1960s, the awards ceremony was broadcast on national television for the first time.

The year 2021 saw a lot of great television and film, and here’s how the HFPA recognized and awarded it:

Actor in a motion picture — drama

Actress in a motion picture — drama

Actor in a motion picture — musical or comedy

Actress in a motion picture — musical or comedy

Supporting actor in a motion picture

Supporting actress in a motion picture

These were some of the main categories under which we listed the nominees and winners for the same. Now, in the next section, you’ll see how you may stream the Golden Globe awards on your Roku.

Here’s how you can watch Golden Globe Awards on your Roku device!

Add fuboTV to your Roku device

What if we tell you that You may also use the Roku website to add fuboTV.

To use fuboTV on Roku, you must have a fuboTV account. Next, you may follow the steps given below:

These are the several ways to watch the Golden Globe Awards on Roku. There are various award categories, such as best motion picture, best actor, best actress, best director, best-supporting actors and actresses, and screenwriting, which are divided into “drama” and “comedy or musicals” divisions. You may also use Roku to watch more interesting TV series, movies, documentaries, and sports on fuboTV. We hope that you liked this article. Thanks for reading!