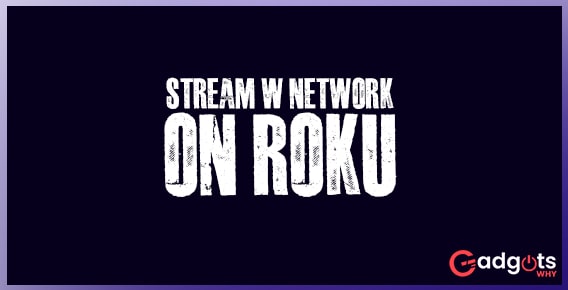 How to Stream W Network on Roku?

Home » How to Stream W Network on Roku?

Entertainment is something that I believe is really subjective to people. This subjectiveness is largely area-based, people of a certain region or country seem to like the content from that place only when they want to watch it. This need exists for almost all of the nations with people wanting content that they can relate to, has a language like theirs, has characters that have similar lives as their own but with some thrill. If you are Canadian and agree with what I said earlier then I’m sure you will like W network. It is a Canadian channel that specializes in Canadian English and it is made by Canadians, for Canadians. Read along as we try to discover what all it has to offer and also understand how to watch W Network on Roku devices that you have.

What is W Network all about?

W Network which is often just called the name ‘W’ is a television channel that specializes in Canadian English language content. It is presently owned by Corus Entertainment which is a huge organization when it comes to content creation. The channel majorly focuses on general entertainment programs that are more oriented towards the female audience.

W Network was set up in 1995 with the name Women’s Television Network (WTN). It had its complete focus on women’s lifestyle shows. The channel was after some time bought by Corus Entertainment in the year 2001. They decided to relaunch it under the current branding which is still being used from the year 2002. With the relaunch, W aimed to change its programs to a mixture of both entertainment shows and lifestyle programming. By the year 2017, W decided to move its lifestyle programming segment to its sister channels and itself started focusing exclusively on entertainment programming. With this change, it saw the birth of the most popular shows under its as it is now sailing through with a very high viewer count.

We are listing down below the best shows that we could find for you to watch on the W Network:

This show explores the lives of three sisters who have come to discover that they are descendants of a generation of female witches. They also get to know that they are destined to fight the forces of evil and bring justice by using their collaborated power of witchcraft.

The show starts when a beauty pageant creator has been found dead. A shrewd hairdresser who works along with a detective decides to risk everything to get the names of those she loved cleared. It Stars the cast of Julie Gonzalo and Ryan McPartlin.

Days of Our Lives: A Very Salem Christmas revolves around the story of Will Horton who is writing a screenplay before his deadline which is on Christmas Eve. He Uses everyone’s favorite feel-good holiday movie tropes, and with them, he creates a festive story that is based on his family and friends in Salem. This comes with various twists and turns that you would never see coming.

The Girl From Plainville is a show that is inspired by the real-life story of Michelle Carter’s infamous  “texting-suicide” case. It is based on the Esquire article with the same name by Jesse Barron. The limited series will try to explore Carter’s (played by Elle Fanning) relationship with Conrad Roy III (played by Colton Ryan) and the events that eventually led to his death and, later, her ending up in a controversial conviction of involuntary manslaughter. The series is a brainchild of Liz Hannah and Death executive producer Patrick Macmanus and UCP which is a division of Universal Studio Group.

How to watch W Network on Roku?

Sadly as of now, W Network is not directly available in the Roku Channel Store. Even though it is available as an extra feature with all the VMedia bundles. You will be able to stream W Network on Roku by making use of the VMedia channel.