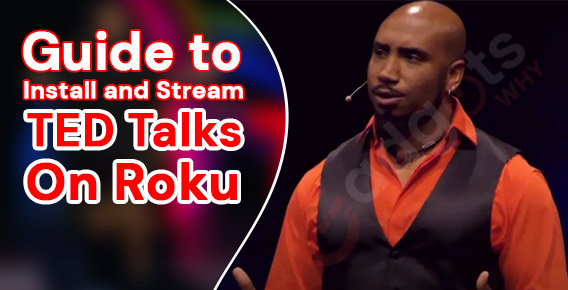 Guide to Install and Stream TED Talks on Roku

Home » Guide to Install and Stream TED Talks on Roku

TED Talks are video presentations by thought leaders in the fields of education, business, science, technology, and creativity. The speeches are given at TED (Technology, Entertainment, Design) Conferences LLC, a media company that was created in 1984 and has been holding yearly conferences since 1990. The TED Roku channel now has over 1700 speeches in its archive. If that number overwhelms you, the channel will deliver a video if you choose one of six options: Jaw-dropping, Funny, Persuasive, Courageous, Inspiring, or Random. Let us walk you through the process of accessing and streaming TED Talks on your Roku streaming device.

Under the slogan “ideas worth spreading,” TED Conferences LLC (Technology, Entertainment, Design) is an American media organization that puts presentations online for free dissemination. Richard Saul Wurman and Harry Marks co-founded TED as a conference in February 1984, and it has been held annually since 1990. In keeping with its Silicon Valley roots, TED’s annual focus was on technology and design. Since then, it has expanded its scope to include discussions on a wide range of scientific, cultural, political, humanitarian, and academic subjects. Since July 2019, Chris Anderson, a British-American businessman, has been curating it through the non-profit TED Foundation (originally by the non-profit Sapling Foundation).

The major TED conference is hosted every year in the Vancouver Convention Centre in Vancouver, British Columbia, Canada. The conference was previously held in Long Beach, California, in the United States. TED events are held across North America, Europe, Asia, and Africa, with live streaming of the speeches available. They cover a wide range of themes in science and culture research and practice, frequently through storytelling. The speakers have a maximum of 18 minutes to deliver their thoughts in the most creative and entertaining manner possible. Bill Clinton, Sean M. Carroll, Elon Musk, Ray Dalio, Cédric Villani, Stephen Hawking, Jeff Bezos, and several Nobel Prize winners have all spoken in the past.

Get TED talks on your Roku device – Here’s how!

Simply follow the procedures outlined below to get your favorite TED presentations on your Roku streaming device.

That’s it! You may now stream your favorite sessions of TED talks on your Roku!

Top 5 TED Talks that could change your life!

Check out these five motivational TED talks that will either improve your life or give you some solace the next time things don’t go your way.

Elizabeth Gilbert is an American author best known for her well-selling memoir ‘Eat, Pray, Love,’ which was published in 2006. People relate creative works with mental health concerns and the anxiety that their work may fall short of their previous efforts. Many writers in the twentieth century committed suicide or suffered from depression. Elizabeth feared that her greatest work was behind her after the tremendous popularity of her book ‘Eat, Pray, Love,’ which was a terrifying thought. She considered how she could create boundaries between her work and her fear of how it would be perceived.

A lot of research has been done on how others perceive our body language and the importance of giving the proper message. Amy Cuddy, on the other hand, digs into how our own body language affects our self-confidence and stress levels, and how a few strategic power poses can make all the difference.

Tom Thum has a remarkable ability to do strange things with his mouth. This incredibly charismatic beatboxer has been described as having “not just a symphony orchestra, but also a jazz band, techno DJ, 1980s synth-pop group, and collection of exotic world instruments all sitting somewhere in his throat.” Tom’s 15-minute presentation immediately became the most popular TEDx video of all time, with more than 44 million views and counting. Tom Thum exhibits his intrinsic aptitude for inhuman noisemaking. He is now known globally for his unique talent to distort and control his vocal cords.

When people talk about happiness, it’s often referred to as a quest—a quest for something so elusive and out of reach that there’s now a never-ending supply of ways to get it. Surprisingly, it may be our ability to choose from thousands of wonderful experiences in life that prevent us from being happy. Dan Gilbert, a psychologist, breaks down pleasure into its two most basic components—the happiness we find and the happiness we create—in this TED Talk, revealing a startling reality.

Brené Brown is a fearless Texan who also happens to be an authority on shame and vulnerability. Brown investigates how we may empathize, belong, and love one another. She reveals a significant discovery from her studies, one that launched her on a personal mission to know herself as well as to comprehend humanity, in her sad, hilarious presentation that has been viewed over 6 million times.

So now that you know how to stream TED Talks on Roku, watch your favorite episodes of it on your streaming device, without any hassle. Thank you for staying with us till the end. We hope that you found this article useful. See you soon!