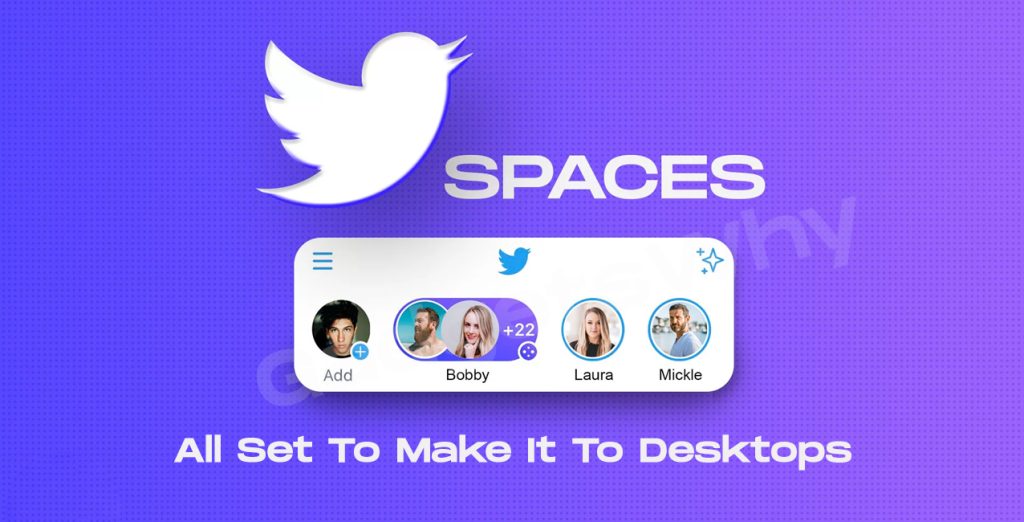 Twitter Spaces All Set To Make It To Desktops

Home » Twitter Spaces All Set To Make It To Desktops

The chirping bird of social networking gave a new definition to social media altogether. The microblogging giant has been the most extensively used social networking platform almost since it was introduced. It has introduced another great feature recently: Twitter Spaces. The much talked about feature was initially a part of Twitter’s IOS and Android. Officials from Twitter recently revealed that a desktop version of Spaces is all set to be released. Let us take a closer look at Spaces but Twitter and learn more about the desktop version.

Twitter announced that they’ll be introducing an audio conversations feature on the lines of Clubhouse, earlier this year. This came after many platforms like Discord, Telegram and Clubhouse introduced or modified similar features.

Discord released its Stage Channel in April this year while Telegram introduced Voice calls 2.0 which were on similar lines. These features involved audio conversations of a large number of individuals that could have unlimited live listeners online. Clubhouse was more or less the first platform to introduce this feature but the fact that it was limited to IOS went against them.

Twitter saw the potential in audio conversations and decided to extend its usability as a microblogging site. This is what led to the introduction of an all new feature called Twitter Spaces.

The audio conversations feature can be termed as “Twitter’s most ambitious introduction till date”. Though it is fairly recent, Spaces is already popular amongst users all over the globe. The reception and the response Spaces has been getting is indeed a great positive for Twitter. More and more people want to learn about Spaces, even more are becoming active users.

Quite similar to its competitors, Spaces is a live audio conversation feature more like a live podcast with certain modifications.

Spaces is still under development as Twitter itself mentioned: “It is being tested and developed”.Twitter urged its users to share their suggestions and feedback on @TwitterSpaces so that the development can be more dynamic. Spaces already has a number of features to offer and would soon add to these.

Followers can see ongoing spaces on the Fleets of their feed. These spaces can be scheduled within a time span of 14 days.. Users can host scheduled spaces and host spaces instantaneously as well. The user has the exclusive right to end a space. The only other way a Space can be terminated if it violates the guidelines of Twitter.

The host can block anyone from the space while other participants will be notified in case a blocked participant is part of the space. All the rights rest with the host. Twitter also has an automated caption option which if enabled by the host generates captions for the conversations. At the moment, the captions tab needs to be turned on for automated captions. Twitter is working on making this feature completely automatic.

There are many such features that the mobile versions of twitter offer. The desktop version is going to be fairly new hence expecting this many features wouldn’t be right.

The announcement for a desktop version of Spaces got many people hyped. There have been significant developments which suggest that Spaces will steadily evolve across platforms. According to reports, the background for Twitter Spaces’ desktop version is not a let down. The feature started off with Twitter’s android and IOS versions but is rolling out on desktops as well.

The increase in user engagement Spaces would see through its desktop debut will surely make Twitter develop it further. It is a matter of time before the microblogging giant rolls out updates for the same.

Though it is visible that Spaces is in its early stages of development, it would be safe to assume a bright future for this venture of Twitter’s. The options and features available for mobile phones do outnumber those of the web version, but the success which is evident in the near future would make Twitter capitalise on the same. What are your views on Spaces by Twitter?