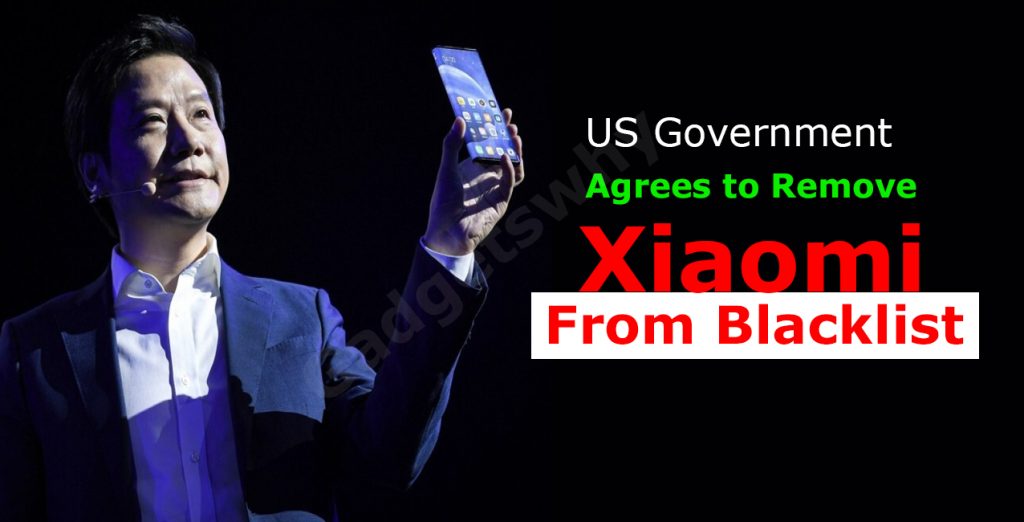 The U.S Government Agreed To Remove Xiaomi From The Blacklist

Home » The U.S Government Agreed To Remove Xiaomi From The Blacklist

XIAOMI CORPORATION is an investment holding company in China, whose principal is to engage in the research, development, and sales of smartphones, Internet of things, and lifestyle products, and also the provision of Internet services, and investment business. It was earlier reported that the United States government has agreed and is now going to remove China’s Xiaomi Corp from a blacklist, a court filing showed, which marked reversal by the Biden administration which was one of the last jabs of Donald Trump at Beijing before exiting the office. This year, Chinese smartphone giant had sued the government earlier, due to which, after the U.S. Defense Department under former President Donald Trump has issued an order related to the designated the firm as a Communist Chinese Military Company, which would have led to a delisting from the U.S. which leads leading to exchanges and deletion from global benchmark indexes. The U.S. government and the Xiaomi Corporation, have agreed now to simply keep aside a Trump administration blacklisting that has restricted American investment in the Chinese smartphone maker.

Xiaomi’s Name Removed From The Blacklist – View Inside Story

According to a filing to the U.S. courts Tuesday, now, the United States Defense Department has agreed over the final order vacating the designation “would be appropriate,”.

And Xiaomi has declined to comment. Hua Chunying, Chinese Foreign Ministry spokeswoman stated at a regular press briefing in Beijing, that she was not aware of any kind of deal the firm may have reached with the U.S.

According to the filing which did not even state whether the agreement included any conditions for removal or not, “The Parties got agreed upon a path forward that might simply resolve this litigation without any need for contested briefing,”. The parties involved are discussing specific terms related and will file an independent joint proposal before 20 May. The U.S. government is still very much worried about American investments in companies that are linked to the Chinese military, said Emily Horne, a spokeswoman for the White House National Security Council.

Big Relief To Xiaomi By US Government

Xiaomi is a company that also makes robot vacuum cleaners, electric bikes, and wearable devices as well as smartphones, which had been an unexpected target for the Trump administration. Xiaomi company, whose co-founder is billionaire entrepreneur Lei Jun with United States chipmaker Qualcomm Incorporation, over more than ten years ago, and that was considered as one of the earliest investors of that time, the company has previously insisted that it is not owned or controlled by the Chinese military.

A U.S. court sided with Xiaomi in the lawsuit and put down a temporary halt on the ban in March. U.S. District Judge Rudolph Contreras stated at the time that there is the scope of Xiaomi to win a full reversal of the ban as the litigation unfolds and issued an initial injunction to prevent the company from suffering “irreparable harm.” The agreement marked a rare victory for China’s technology giants caught in the crosshairs of the U.S. government since the two nations confronted issues ranging from trade to human rights and Hong Kong’s rule. Donald Trump had signed an order in November apart from American investment in Chinese firms that were owned or controlled by the military in a bid to pressure Beijing over what the U.S. has defined as abusive business practices.