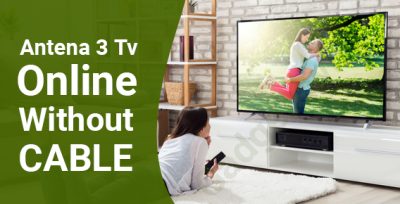 Checking out various television stations may keep you up to date on what’s going on in the world, so if you’re looking for a means to watch Antena 3 online without cable, it’s simple to do. Antena 3 is a Spanish television channel that has been broadcasting since 1988 and broadcasts a wide range of programming, including news, television shows, and movies.

Various Live TV Streaming options can be used to watch Antena 3 online. Let’s see which ones are those.

It debuted on January 25, 1988, as Canal 10 Espaa, but that channel was shut down on September 1, the same year. The following year, it was replaced by Antena 3, a new channel that began test transmissions on Christmas Day, 25 December 1989, and then began official broadcasts throughout Spain exactly one month later, on January 25, 1990, with a program hosted by journalist Miguel ngel Nieto, making it Spain’s first nationwide private television station.

What programs does Antena 3 serve its audience?

Where can you watch Antena 3 online without cable?

Sling TV is one of the considerable options, and it’s a terrific platform that starts with three basic bundles: Orange ($25/mo), Blue ($25/mo), and Orange + Blue ($40/mo). When you sign up, you can choose from any of these options. In any case, scroll down and select the Espana bundle from the “Latino” category for an additional $5 per month. That channel pack includes Antena 3 and other similar stations, so you’ll have plenty of options when you sign up for Sling.

Finally, there’s DirecTV Now, which has the most basic bundles – seven – of any over-the-top platform we’ve seen so far. However, Antena 3 is only available with Optimo Más, which costs $86 per month and includes a large number of Spanish-language channels. For more information on what DirecTV Now has to offer, see our DirecTV Now review.

You are so close to being able to enjoy Antena 3 online without cable, anytime and from anywhere you want, especially since so many people are finally cutting the cord with their cable provider.

This is how you can access Antena 3 online without cable.

What is Antena 3 Live?

Antena 3 Live is the online streaming portal for Antena 3, a Spanish television station situated in the Madrid area. You can find amazing Telenovels, reality shows, news, and International series worldwide on Antena 3 channel. With a large worldwide audience in Latin America and the Caribbean, it is one of the most popular Spanish-language broadcasters in the world.

Money, fashion, drama, entanglements, love, jealousies, plans, and counter-plots involving its owners, customers, and residential employees are all part of this feel-good, engaging Spanish novel set in Madrid in the late 1950s.

Alberto (Miguel ngel Silvestre) has been left by his late father to handle Velvet, one of Spain’s most prominent fashion boutiques. This series is based on a 1970s set Spanish series of Television. It takes place in the 1950s and 1960s and has period attire and automobiles. The show’s major plot revolves around the business decisions regarding the fashion store’s continuation, as well as Alberto, the heir of Galeras Velvet, and Ana (Paula Echevarra), who works as a seamstress there.

A boarding school is full with mysteries and secrets, as students discover. El internado: Las Cumbres, series- The Boarding School: Las Cumbres is a series having mystery and teen drama-thrill that was debuted on Amazon Prime Video on 19th February 2021. It is a relaunch of the famous series El internado, which first ran from 2007 to 2010. It is produced by Atresmedia Studios and Globomedia (The Mediapro Studio).

This series encompasses Spanish fantasy that airs on Antena 3 from 2010 to 2012. It was developed by Daro Madrona and Ruth Garca. The tale recounts the storey of the “family” Castillo Rey, a group of people who are actually unrelated to one another but must pretend as if they are because they have a secret: the children possess extraordinary abilities, and a group of people is hunting them down. In charge of the TV, production was Boomerang.

Los protegidos: El regreso, a continuation of the series, will be broadcast on September 19, 2021.

Who doesnt like served top shows or series. Your time is saved already. So here you go with the top 3 series offered by Antena 3 channel. Along with that, you must have read how you can watch Antena 3 online without cable. Now it’s time to enjoy.