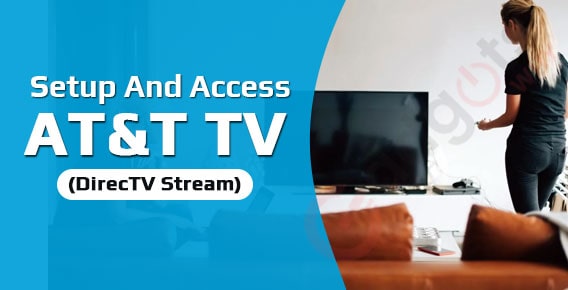 Do you want to activate your new DIRECTV set-top box online, or do you need to refresh the signal on your DIRECTV receiver? If you follow our tutorial, you’ll be watching your favorite shows in no time, as we provide step-by-step instructions. For your convenience, we’ll also include information on the plans and bundles offered by ‘DirecTV Stream.’ Let’s get started right away and learn how to watch AT&T Tv online on streaming devices!

DIRECTV Stream is a collection of streaming multichannel television services available in the United States from DIRECTV.

Three distinct services are covered by the trademark, all of which use the same infrastructure and software. The streaming television version of the traditional DIRECTV satellite television service, DIRECTV Stream, debuted as AT&T TV in March 2020. Users rent Android TV-based set-top boxes, which are provided on a contract and optionally bundled in the same way as traditional television providers. AT&T launched AT&T TV on July 30, 2019, a streaming television service that includes an Android TV set-top box with a Google Assistant-based voice remote, the same apps as DIRECTV Now, and 500 hours of cloud DVR storage.

Unlike DIRECTV Now, this service is only available on a contract basis (and only as part of AT&T Internet packages) and requires the rental or purchase of proprietary set-top boxes. Although the programme allows for self-installation, there are still activation fees. AT&T TV and its former brother AT&T TV Now has been rebranded as DirecTV Stream, a new unified service born from a deal between TPG Capital and AT&T for AT&T’s streaming assets.

DirecTV began contacting AT&T TV and AT&T TV Now subscribers of the change on August 14th. According to a spokeswoman for The Verge, subscribers were alerted on the welcome screens of both services’ mobile apps that the change would take effect on August 26th.

AT&T’s TPG Capital-acquired services, which did not include HBO Max, are rebranded as DirectTV Stream. (WarnerMedia, which owns HBO Max, is planning a merger with Discovery in 2022.)

It’s understandable if you’re perplexed by this. Hopefully, this is the last major branding change AT&T’s current and potential streaming subscribers will see for a long time.

About the ‘DIRECTV Now’ App

AT&T’s DirecTV Now is a streaming channel package (which acquired DirecTV in 2015). It provides a large number of TV channels for a monthly fee, but instead of using a cable or satellite TV box, it streams through Internet-connected devices.

Pricing for about 60 channels starts at $35 per month. The four main broadcast networks, major cable news networks, nationally aired sports channels like ESPN and FS1, and a plethora of general entertainment channels are all included in this bundle. Additional channel tiers cost $50 per month, $60 per month, and $70 per month, respectively. For $5 a month, you can add HBO or Cinemax to any bundle, and for $8 per month, you can add Starz or Showtime. There may be sales taxes, but there are no additional costs.

General specifications of the ‘DirecTV Now’ app are listed below:

How to watch AT&T Tv on your preferred streaming device?

The Amazon FireStick is made for watching movies and TV shows online. It just makes sense to install the AT&T TV app on it. By streaming AT&T TV to your Firestick, you can watch new shows from the USA, news from MSNBC, and reality TV from TLC without having to pay for a pricey and inconvenient cable box.

Simply follow these steps to add AT&T TV to your Firestick:

That’s it you are now ready to watch AT&T TV on your Amazon FireTV or FireStick.

Follow these steps to get AT&T TV on your Apple TV:

Follow these steps to get AT&T TV on your Android TV:

Officially, AT&T TV is available on Roku players. The procedures to get AT&T TV on Roku TV are outlined in the section below.

Voila! You are now ready to stream AT&T TV on your Roku

Wondering about the costs of DirecTV Stream packages? We’ve got you covered. Have a look at our comparison of the various plans and packages offered by DirecTV Stream in 2021:

This gets us to the conclusion of the article. We hope it has been useful in providing you with information on how to access DirecTV Stream. Thank you for sticking it out with us all the way to the end. We’ll see you soon!