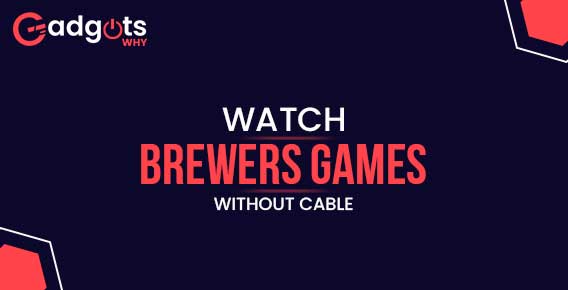 How to watch Brewers games without cable?

Home » How to watch Brewers games without cable?

Because it is the off-season, there are no future games for the Milwaukee Brewers at this time. But how to watch Brewers games without cable in the future or the ones that have already aired? Check out Sling, Fubo TV, Hulu, Vidgo, or YouTube TV if you want to watch Major League Baseball games during the 2023 season. You can also watch MLB games on DirecTV Stream. Everything you need to know about the Milwaukee Brewers during the off-season is included in this article. Let’s begin.

You can keep up with what’s happening in the world of baseball even if the regular season is over by subscribing to Sling TV, fuboTV, Hulu With Live TV, DirecTV Stream, Vidgo, or YouTube TV. These services are among the many that are available. You can always catch up on the most recent news and information by tuning in to MLB Network or one of the other leading networks, such as ESPN. You may even want to think about getting an MLB.TV membership so that you can watch game highlights and whole games from the past, in addition to other amazing material.

How to watch Brewers games without cable?

How Can I Watch the 2023 Season of the Milwaukee Brewers Online?

Games from Major League Baseball are broadcasted on national television by Fox (including Fox Sports 1), TBS, ESPN, and the MLB Network. However, in order to view the games that your local team plays, you will also need access to your regional sports network. If you want to watch games involving clubs from other markets, you may also do so on MLB.TV. Confused? Don’t be afraid. Let’s go through all of your best choices for viewing the Milwaukee Brewers season in the future so you can make an informed decision.

Sling is a streaming service that allows you to watch Milwaukee Brewers games at the lowest possible price. Either the Orange or Blue bundle, both of which cost $35 a month, come with a slightly different assortment of channels. You also have the option to combine both packages by paying an additional monthly fee of $50 for Orange + Blue.

If you subscribe to Orange + Blue, you will, in the majority of areas, also get TBS, FS1, and ESPN. The MLB Network is included in the Sports Extra package, which costs $11 a month to subscribe to.

However, Sling TV does have some useful features. It is compatible with almost every streaming device, and you can watch Sling Blue channels on three different devices while watching Sling Orange channels on just one device. You also get a DVR with a capacity of 50 hours, which allows you to record games and watch them at a later time. If you want to watch games played by the Milwaukee Brewers, Sling TV could be the ideal option for you to go with.

If you want to watch the Milwaukee Brewers 2023 season but don’t have cable, Fubo TV is another option that you might consider. The basic bundle is $69.99 per month, and if you want a few more channels and some other advantages, you can upgrade to a higher-tier package for an additional fee.

You will be able to watch the vast majority of games that are broadcast on national television since your package will include ESPN, FOX, FS1, and MLB Network. On the other hand, you won’t have access to TBS, so this is something to think about before you decide to join.

There are several other advantages that come along with using fuboTV. It is compatible with the vast majority of streaming devices, and it enables streaming on up to ten devices at the same time. In addition to that, you will get 250 hours of cloud DVR storage, with the option to increase to 1,000 hours for an extra cost. Give it a go right now to see whether or not it will work for you.

If you want to watch the Milwaukee Brewers this season but don’t have cable, Hulu is another choice you have. It will cost you $69.99 each month. You will get ESPN, FOX, FS1, and TBS in exchange for your money. As you do not have access to the MLB Network, it is possible that you may be unable to see some of the games that are being broadcast nationwide this season.

Hulu with Live TV has good compatibility with a variety of devices, and it enables users to simultaneously watch content on up to two of those devices. For a monthly fee of $9.99, you can enjoy unlimited streaming inside your house and up to three streams while you are away from home. Additionally, it comes with an unlimited cloud DVR. You have nothing to lose by giving it a go today; just see whether you like it.

On DirecTV Stream, you’ll be able to watch the Milwaukee Brewers play. Its plans begin at $69.99 per month, but in order to watch Milwaukee Brewers games, you’ll need to upgrade to the “Choice” package, which costs $89.99 per month. You will have to pay a little bit more, but in exchange, you will get FOX, FS1, ESPN, TBS, and MLB Network.

Additionally, DirecTV Stream is equipped with a number of really useful features. It supports practically every streaming platform and allows you to broadcast on up to 20 different devices at once in your house. In addition to that, you receive an unlimited cloud DVR that can record everything from games to programs to movies and more. Because of this, it is a good option for viewing the 2023 Major League Baseball season, so you should give it a go.

During the 2023 season, those who do not have cable can watch Milwaukee Brewers games on Vidgo as an additional alternative. The “English Plus” bundle is available for a price of $59.99. You will get more than 110 total channels in exchange for your money. You will be able to get ESPN and MLB Network, in addition to FS1 and FOX. However, you won’t get access to TBS.

The features offered by Vidgo are adequate. It does not come with a DVR, but it does allow streaming on three different devices at the same time. Additionally, it is compatible with the vast majority of contemporary streaming devices. Although it has some issues, Vidgo is still a service that offers a passable method to view the Milwaukee Brewers games this season.

During the 2023 season, your only remaining option for viewing the Milwaukee Brewers is to subscribe to YouTube TV. It has a monthly fee of $64.99 and comes with more than 85 total channels. With YouTube TV, you will get access to ESPN, TBS, FOX, FS1, and MLB Network, which means that you will have a very good selection of nationally aired games to choose from.

Where and How to Watch Replays and Highlights of the Milwaukee Brewers Games?

If you want to watch Milwaukee Brewers highlights and replays at any time, not just during the off-season, you should seriously consider subscribing to MLB.TV. You may watch Brewers’ content whenever you want. And you can still get your baseball fix even when the regular season isn’t going on since MLB.TV allows you to view entire game replays, highlight reels, and a ton of other stuff from previous seasons. You will also get complete access to titles that are not currently available on the market. A one-year subscription to MLB.TV is available for a price of $139.99.

You also have the option of using your membership to a streaming service such as Sling, Fubo TV, Hulu, DirecTV Stream, Vidgo, or YouTube TV in order to sign in to applications such as FOX, FOX Sports, and ESPN. After that, you will have the ability to access previously stored game replays, shows, and other stuff.

So, this is how to watch Brewers games without cable. All of these streaming services let you enjoy Brewers games at nominal prices and you can get their subscription by directly visiting their websites. If you have any further questions or doubts, do leave them in the empty comment space below.