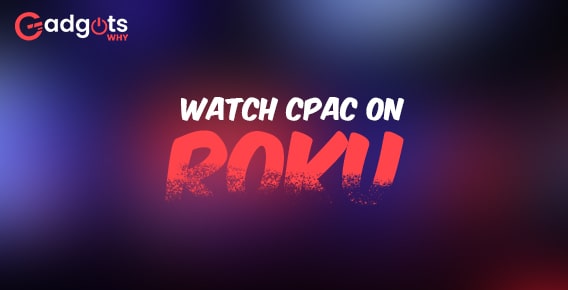 Guide to Add and watch CPAC on Roku

Home » Guide to Add and watch CPAC on Roku

CPAC is an annual political convention attended by conservative activists and elected figures from across the United States and beyond. The American Conservative Union hosts CPAC (ACU). In 1974, the inaugural CPAC was held. The most recent 2022 conference took place in Orlando, Florida from February 24 to 27. Former US President Donald Trump, Florida Governor Ron DeSantis, and media personality Sean Hannity were among the speakers. In this post, we’ll teach you how you can access and watch the CPAC Live on your Roku device. Begin without any further delay!

The first day of CPAC 2022 was Thursday, February 24. The meeting will last through the 27th of February.

Here’s a look at some of the speakers at this year’s CPAC:

The whole roster is available on the event’s website.

Under the “Watch Live” option of the event’s website, CPAC 2022 will be Live-streamed. Certain high-profile CPAC lectures will also be broadcast live on cable news networks such as Fox News, CNN, and MSNBC.

CPAC 2022 will be broadcast in its entirety on Fox Nation, Fox News’ for the on-demand streaming services, like Roku, Amazon Fire TV, etc; in addition to being streamed live on the event’s website.

How to watch CPAC Live on your Roku?

To access and stream CPAC on a Roku device, here we have considered FOX Nation, Fox News as an example to show you how it’s done. So, look into the following steps to watch CPAC Live on your Roku device, via Fox Nation:

And finally, you will get access to watch the CPAC on your Roku. Although Fox Nation generally costs $5.99 per month (or $64.99 per year), CPAC 2022 attendees can get a free 30-day trial. To get the discount, go to FoxNation.com and use the code “CPAC” during the checkout process.

If there was ever any doubt about Trump’s power among the Republican Party’s conservative base, CPAC dispelled it.

The results of CPAC’s 2024 presidential straw poll, which showed Trump as the overwhelming favorite among attendees to win the GOP nomination, were released on Sunday, confirming this. In a hypothetical primary that included more than a dozen potential candidates, 59% said they would vote for Trump.

According to the straw poll, 85 percent of CPAC participants would support Trump if he campaigned for president again in 2024, with 72 percent saying they would “strongly” support him.

DeSantis has frequently rebuffed speculation about a presidential run in 2024, claiming that he is only focused on his position as governor and reelection this year.

Nonetheless, CPAC emphasized his growing celebrity within the conservative movement. Even though they are dead bent on backing Trump again in 2024, his speech on Thursday drew one of the largest crowds of the whole conference, and delegates frequently pointed to him as a potential successor to Trump.

DeSantis’ appeal among conservative grassroots was also proven in Sunday’s straw poll. While Trump won by a large majority in a hypothetical primary, DeSantis came in second with 28 percent of the vote, making him the only would-be candidate not named Trump to receive double-digit support.

DeSantis would be the overwhelming favorite for the GOP nomination if Trump does not run again in 2024. 61 percent of those polled indicated they would vote for DeSantis if Trump was not on the ballot.

Despite the fact that Trump stole the show on Saturday, CPAC gathered a long list of potential White House candidates, all of whom were looking to carve out their own niche.

It was a plea for lifting energy rules for South Dakota Governor Kristi Noem (R), who spoke at the conference on Friday. Former Secretary of State Mike Pompeo, on the other hand, spent much of his address railing against what he called China’s growing global power. DeSantis used his speech to reinforce his image as a defender of the “biomedical security state.”

The remarks as a whole suggested that the race for the Republican presidential nomination in 2024 is already heating up.

Even still, it was evident that the potential contenders were treading carefully. Given that Trump is considering another presidential run in 2024, none of them wanted to trip on his toes, thus practically all of them paid honor to the previous president in their remarks.

“We have some wonderful fighters,” Noem added, referring to President Donald Trump. “However, he isn’t alone.” “The people of the United States are on our side.”

So now that you know how to access and watch CPAC Live on your Roku streaming devices via Fox Nation. Go binge-watch all of it without any interruption! Thanks for staying with us till the end, and we’ll see you in the next one!