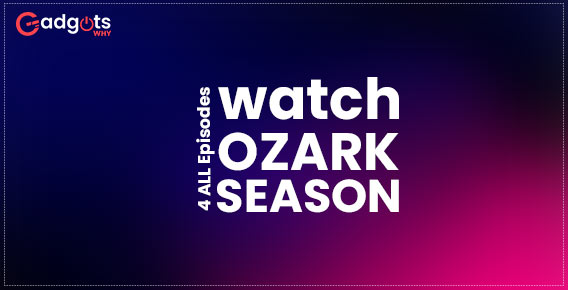 Since its debut in 2017, the crime drama Ozark has received several Emmy and Golden Globe nominations, with several of them being won. It’s a tense and wonderfully made series starring Jason Bateman and Laura Linney as the Byrdes, a husband and wife money laundering team, and it’s approaching a peak with its fourth and final season. Ozark’s last season has been divided into two parts. Part 1 of Season 4 is now available on Netflix, with Part 2 coming later this year. Let’s have a look at how and where you can stream and watch all the episodes of Ozark season 4, on your preferred streaming device. So, let’s begin without any further ado, let’s begin!

Ozark, the crime drama – In a nutshell

On Ozark, the money-laundering Byrde family has no easy way out. The Netflix crime thriller about a Chicago family forced to relocate to the Missouri Ozarks to launder money for a Mexican cartel is one of the streaming service’s best originals, and the show, starring Jason Bateman and Laura Linney, reached new heights with its better-than-ever third season, which earned 18 Emmy nominations in 2020, including one for Julia Garner for Best Supporting Actress in a Drama Series.

Ozark always leaves viewers wanting more, with all of the jaw-dropping scenes and the culminating bloodshed in Season 3. When Netflix renewed it for a fourth season in June 2020, it stated that the series’ final episode would be split into two parts. (Breaking Bad, Mad Men, and The Sopranos also ended with divided final seasons in a similar method).

We’ve finally figured out when we’ll be returning to Missouri. The first half of Season 4 was released on January 21, and the second half will be released on April 29, 2022. This is great news if you were worried Netflix might make you wait a long time.

Seasons 1-3 had ten episodes each, however this time you’ll be able to watch even more dark and dismal episodes. Along with the announcement of a fourth season, Netflix also revealed that it would be expanded to 14 episodes in order to complete the storyline.

What is the best way to watch Ozark season 4 online?

Ozark season 4 part 1 released all seven episodes at the same time. The second half will be released on April 29, 2022; later this year.

The fourth and final season will be broken into two parts, each including seven episodes. Basic ($10/month), Standard ($15.50/month), and Premium ($20/month) are the three levels of service. The new “Ozark” episodes, as well as all three prior seasons, are available to Netflix users. Each tier has its own set of advantages in terms of streaming quality and the amount of screens you can watch on. Here’s how it works:

Netflix no longer offers a free trial for new customers, as it once did. Any web browser or the Netflix app can be used to view “Ozark” or anything else in Netflix’s massive collection. Most smartphones, Roku, Amazon FireStick, Xbox and PlayStation consoles, tablets, and smart TVs support the app.

How can I stream Ozark from outside the United States?

Ozark is a Netflix original, so you’ll need to be a Netflix user to watch the final season or catch up on previous seasons.

Netflix libraries vary by country, so if you’re traveling abroad, you might find that your favorite show isn’t available because the service will match you up with what’s available in your present location rather than what you’re used to at home. Using a reliable VPN can help you get past this.

A virtual private network (VPN) is a useful piece of software that allows you to modify your IP address to match whatever region you want, allowing streaming services like Netflix to give you whatever TV episodes and movies you want.

You can view your favourite Netflix shows from wherever if you use a VPN.

Right now, ExpressVPN is one of the best VPNs in the world. We tested all of the major VPN services and discovered that ExpressVPN is the best option for accessing foreign Netflix libraries from the United Kingdom, the United States, Canada, Australia, and other countries.

Netflix has unveiled the trailer for the final season, which shows Marty and Wendy confronting some grave challenges. The trailer teases vehicle collisions and physical battles, so the season should be action-packed.

How excited are you to see the first episode of Ozark’s final season? Leave your thoughts in the comments section below.