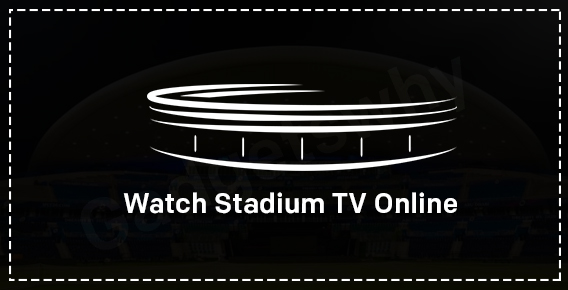 Stadium TV as one can infer from the name is an internet sports network with 24/7 live streaming across both digital and broadcast platforms, while also consisting of VOD on-demand video content such as additional live games and events. Launched in the year 2017, the company is headquartered in Chicago, Illinois with its owner being Sinclair Television Group Inc. Now, before we get more details on Stadium TV, make sure your stick to this guide to learn how to watch Stadium TV 24/7 by different means.

The format in which the Stadium TV streaming service is distributed is over the top which can be streamed through the official website and other digital partners, sub-channels, and private online streaming platforms.

If you want to stream all the sports goodness from the Stadium without having to bother about the knotty channel system of the television then we have got an array of online streaming platforms that allow you to watch the content from the Mountain West Conference, the Patriot League, the West Coast Conference, Conference USA, and the Southern Conference.

How to Watch Stadium TV online?

It is not an unusual course to take for media companies to offer their services through their own websites. Stadium joined the race within the matter of its inception as a company and now you can stream all the sports that it has to offer for free. Along with this, you will be getting an unlimited access to its sports news articles, a guide that shows which shows, game highlights, and many more.

Entertaining the sports palette of US, Spanish and Canadian residents, Fubo TV is a streaming television service and the type of sports streamed varies from country to country. When it comes to streaming Stadium TV online, Fubo TV definitely has it, but alas not for free, as part of their Fubo sports plus package. However, there is a 7-day free trial that you can make use of but for the long term, they have a 75.99$ monthly plan that will provide you unlimited access to not just Stadium TV but to other 90 channels.

Sling TV is another American Television service company that comes under the Dish Network. Sling TV does have Stadium which you can, however, only stream through the Sling Orange package which is available for a 35$ monthly fee. But, the benefits hinged to it is that you will be able to record up to 50 hours in your cloud DVR while streaming your favorite sports at the same time.

Twitch is essentially a video game live streaming service that includes live broadcasts of various esports competitions. However, it has over the years broadened its dimensions to include entertainment services from different genres.

In May 2018, Stadium allied with Twitch which enables the former to run its live service viz. a viz. former. If you want to clutch onto the additional sports commentary and analysis then you can do so through Stadium 2, which has 896 followers as of now.

The bottom line remains that you can stream and watch Stadium TV on twitch with great ease.

Stirr TV is a pretty much ubiquitous video streaming platform as it is available on the web, on iOS and Android, on various TVs streaming devices such as Amazon Fire TV, Roku, Apple TV, Android TV, and Comcast. Since, the owner of the company, Sinclair Broadcast Group holds a stake in Stadium, the latter therefore is available on Stirr TV to stream along with a separate option of a channel program guide. And yes, it is absolutely free to stream with some ads which you will have to endure.

The Comcast-owned Xumo TV is an over-the-top internet television service founded approximately 10 years ago. Since Xumo licenses its content obliquely from content distributors, it is 100 percent a legal and free platform for live streaming stadium TV.

Roku online streaming platform offers streaming content from Stadium as well without charging you any fee along with several other TV shows free movies and many more.

Platforms that allow you to watch Stadium TV, partially

With 53.4k subscribers currently, Stadium is also available on YouTube and has its own separate channel. However, there are just some post-match clips and extras, usually lasting for a few minutes that are available for you to watch.

However, YoutubeTV which offers live streams and on demands videos features Stadium as part of its YoutubeTV sports plus package against the pressing cost of $75.99 a month.

Back in November 2017, Facebook acquired rights to stream exclusively 27 college basketball telecasts from Stadium and since the Facebook watch is free, you can enjoy this exclusive content but the live TV as a whole won’t be available.

Just like the above two, Stadium has a presence on Instagram as well with over 64.5k followers in the moment. You will be able to witness several posts and short video clips through Instagram feed and stories.