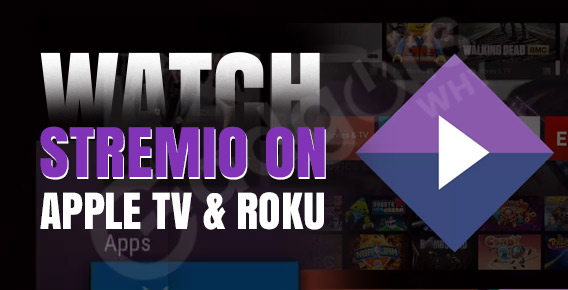 A Quick Guide to Watch Stremio on Apple TV & Roku

Stremio is a free video streaming app that allows you to watch popular and current movies and TV episodes. More media content is available on the app than on subscription services such as Netflix, Hulu, Disney+, and others. You can view popular movies and TV series on a larger screen by installing Stremio on your favorite streaming platform. It will pique your interest in streaming to new heights.

This guide will show you how to install and stream the Stremio app on Apple TV and Roku. So, without any further ado, let’s begin!

Stremio is a cross-platform media management tool that serves as a one-stop-shop for aggregating video content. Stremio, like Kodi and Plex, allows users to install addons or plugins (both official and unauthorized) to meet their specific needs. It provides a large number of free audios, movies, games, and videos. The program connects to multiple sources to stream multimedia content, and all captured data is saved in the cloud. The software provides a full collection of movies, TV series, and web channels by default. You can sort those products by category, and each entry will have album art, descriptions, actor information, and IMDb ratings. You can stream the media over the Internet once you’ve loaded it into your personal library.

Features of the Stremio app

Some of the primary features of this famous streaming app are as follows:

Because the Stremio App isn’t supported by Apple TV, you’ll have to rely on other means. Stremio is only available on Apple TV if you use the Airplay feature on your iPhone or iPad.

Now, on your iPhone or iPad, use the Stremio app and watch your favorite movie or TV show. That is all there is to it. On the larger screen, enjoy streaming your favorite media.

Q. Is it safe to use Stremio?

A. Yes, the code is publicly auditable and you may review it yourself because it is open-source software.

Q. What is Stremio’s revenue model?

A. Stremio used to use multiple networks to run non-intrusive display advertisements in the past. AdEx (https://www.adex.network/), a startup founded by the same founding team that focuses on privacy-preserving, transparent ads, is currently running even less intrusive ads (visible on the top of Discover).

Q. Is the movie Stremio available for free?

A. As you can see, Stremio has a plethora of add-ons that you may use to access free internet content. All you have to do now is put them in place! After that, you can sit back and enjoy it by viewing your favorite TV series and movies for free on the internet!

Q. What are some of the stuff you can watch on Stremio?

A. You may watch movies, shows, live TV, YouTube videos, and much more on this platform. Here’s how to get Stremio on your FireStick or Android TV Box if you don’t already have it. Stremio, like Kodi, requires addons to stream content.

Q. Is it possible to track Stremio?

A. The built-in calendar on Stremio can be used to keep track of current TV programs. However, before you can use it, you’ll need to tell it which shows you want to watch. We can see all of the dates when The Simpsons aired or will air if we add it to our library and then check the calendar.

So now that you know how to install and access the Stremio app on Apple TV and Roku, watch your favorite shows on the Stremio app, without any hassle. Thank you for staying with us till the end. We hope that you found this article useful. See you soon!