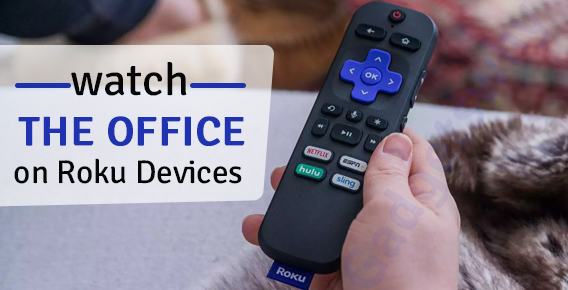 How to watch THE OFFICE on Roku Devices?

Home » How to watch THE OFFICE on Roku Devices?

The subject of how to watch The Office in 2021 is as relevant now as it was when the smash-hit comedy originally aired on NBC in 2005. Can you believe it’s been more than 15 years since we first met Michael Scott and the Dunder Mifflin team? Despite the fact that the program ended seven years ago, it remains one of the finest on television and continues to draw large audiences. The Office was still the most-watched TV show on Netflix, according to Nielsen data. Now if you are wondering how you can watch THE OFFICE show on Roku device then this is all for you.

Is there a Netflix version of The Office?

‘The Office’ was originally accessible on Netflix but has been unavailable to view since January 2021. If you’re a Netflix customer, don’t be disappointed; the streaming service has a variety of similarly humorous and engaging sitcoms. You may watch ‘Schitt’s Creek,’ ‘New Girl,’ and ‘The Good Place,’ all of which are enjoyable alternatives to ‘The Office.’ Nevertheless, we will tell you in this article how you can The Office on Roku.

How to watch THE OFFICE on Roku device?

And that’s how you can watch the mind-blowing The Office on Roku device.

Peacock Premium subscribers have access to a substantial amount of additional The Office content. With every episode, this is what you will receive-

Is The Office available on Hulu?

Although ‘The Office’ is not accessible on Hulu, curious fans may watch ‘Superstore,’ ‘Black-ish,’ and ‘Fresh Off The Boat,’ which are all excellent office comedies.

Is there an Amazon Prime version of The Office?

‘The Office’ is not included in the Amazon Prime subscription’s free streaming offerings. On Amazon Prime, you can buy or rent whole seasons or individual episodes of ‘The Office’ to watch as video-on-demand. If you’re a Prime member seeking comparable stuff to watch for free, look into ‘Monk’ and ‘Workaholics.’

Now that you are done with the answer to the question how can you access THE OFFICE on Roku device you are good to proceed further. I’ll tell you some amazing episodes of this show that is worth watching.

In order to watch THE OFFICE on Roku device, you have to get the Peacock on your device. Here are the steps to download it on the Roku device. Follow it carefully-

5 best episodes of The Office

The catchy song “Ryan Started the Fire!” by Dwight is one of the main reasons for this episode’s inclusion on the list. ‘The Fire,’ probably the greatest episode of the season, began with Michael conducting a job interview with the temp Ryan when fire intervened. The staff gathers outdoors, where the bulk of the employees play games, while Michael and Ryan talk business school, with Dwight joining them uninvited. Finally, Dwight discovers the cause of the fire: Ryan, and turns it into a song, much to Michael’s joy and his own. Many characters’ relationships are established in this episode, including Michael’s strange crush on Ryan, Pam and Jim’s emotions for each other, and Dwight’s patronization of Michael.

Because of the lighthearted and emotional tone of the text, ‘Murder’ is included on the list. Dunder Mifflin’s insolvency is rumored, causing the staff to go into disarray. In an attempt to defuse the uproar caused by the announcement, Michael begins a game of Murder and attempts to defuse the situation. While the majority of people collaborate, some people want to be cautious. The performers were given the opportunity to try out a Southern accent, and several of them did a fantastic job.

Jan incorporate is contacted about a suspicious refund in the company’s account. The money comes from a government program that reintegrates repentant felons into the workforce. Michael is desperate to defend Martin Nash, a black employee after it is found that the hired ex-convict is a black employee. When Martin makes the outrageous assertion that the jail is a better place to work than Dunder Mifflin, Michael loses it and seeks the aid of Prison Mike, who tells him about being tormented by dementors at the prison. The episode is dominated by the program’s intellectual and amusing perspective on racist profiling and other racial epithets and stereotypes, which appear frequently on the show. Prison Mike has now become a famous figure, which is one of the reasons why the inmate is one of the finest episodes of ‘The Office.’

Since the first episode, Toby and Michael’s connection has been well-documented. The latter’s exuberant and often offensive ideas were frequently thwarted by the former’s presence. Michael’s joy knew no boundaries when Toby decided to leave the job and travel to Costa Rico. There isn’t a single minute of ‘Goodbye Toby’ that isn’t entertaining. Everything is in its right place. Michael’s final song, his gift to Toby, and the grandeur of the moment all led to one conclusion: genius!

Michael’s Mr. Handel anecdote and Dwight’s “Don’t be an idiot” are perhaps the season’s and show’s highlights. Ryan invites Michael to speak as a guest lecturer in his school’s Emerging Business class. Meanwhile, Dwight is battling a massive bat that is causing havoc at the workplace. Michael Scott’s character could not have been performed better by anybody else. Michael’s fondness for his colleagues, whom he considers family, and his love of his profession are demonstrated in the last scene, where he is the only one to show up for Pam’s art display despite the fact that the whole office is aware. It’s very heartwarming how he makes selling paper sound so meaningful. A lovely show on the lovely link that exists between individuals.

It’s all set. Now you can enjoy one of the most amazing series-THE OFFICE on Roku device whenever you want.