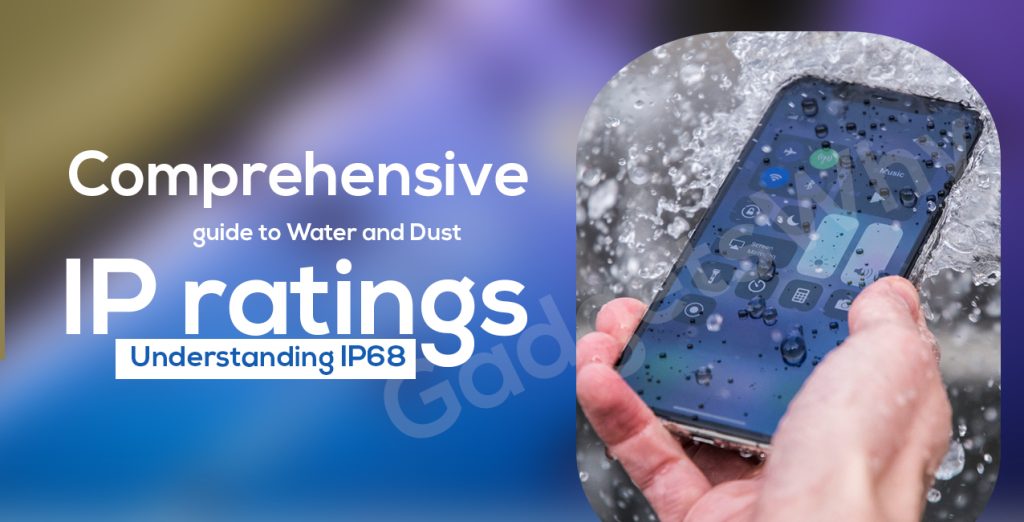 You might have come across the term IP followed by two digits. Have you ever wondered how water-proofing and dust-proofing in phones work? In case you didn’t know what they are, this article is the right one for you. Let us see how IP ratings work along with the water and dust-proofing of mobile phones.

We all want a phone that can withstand extreme conditions to the maximum available limit in the industry. The risk of dropping your phone in the toilet or splashing it in a swimming pool is always there. The exposure to dirt and particulate matter can not be negated either, Therefore there is a dire need for the phone we spend our hard-earned money on to be durable. This durability has several aspects to it. The physical composition of the phone is just one aspect of its durability. There is one more important aspect that plays an important role, this is the IP rating. Let us understand water & dust IP ratings and their aspects.

IP68 Ratings and other IP ratings and their aspects

So let’s start with the very basics, the IP in IP ratings stands for Ingress Protection. In case you are not aware of the term, Ingress Protection is the degree up to which the phone stops anything from getting inside it physically. Now, this can be through ports, screws, or any opening which can allow dirt to enter the phone.

IP ratings are traditionally made of 4 characters and extremely rarely 5 characters. Two of these 4 characters are IP which we just discussed. The other two characters give the degree of ingress on two broad types of physical agents: Solid and Liquid.

The third character in an IP rating gives an idea about the solid matter ingress protection the phone has. The maximum rating a device can have in this place is 6. Thus, an IP rating of IP6 means maximum protection against solid particulate ingress.

The fourth character represents the ingress protection against

In case you are wondering what the 5th character would do if they’re at all is one, it would take the third state of matter, i.e. gas into consideration. So basically if a phone is to withstand high-pressure jets of steam, it would actually have 5 characters in its IP ratings.

Therefore a phone with (water & dust) IP ratings, IP68 would provide maximum Ingress Protection. Though it can’t quite be called complete protection, since these ratings have their upper limits as well. So what are the fundamental differences between phones with different IP ratings? Let us see.

Let us understand the limits to a phone that is rated IP67, Samsung S21 Ultra being one of the more recent phones to have that rating. According to its rating, it provides great dust resistance which can be seen by the third character of the rating. The rating of 7 signifies that the phone has been tested to work underwater up to the depth of 1m for 30 minutes.

The case for IP65 rated phones is the same when it comes to dust resistance but the water-resistance would only be there for light sprays or rains. The phones that have an IP65 rating are not certified for working underwater. There are certain phones like the Sony Xperia Z5 that have dual ratings (IP68 & IP65). This means that such phones have been tested underwater and sprayed with a 6.3mm nozzle during testing. Basically, it can be taken out for swimming and during rains as well.

The folks in the industry also use the term ATM for giving details about the extent up to which a device can stay underwater. 1 ATM refers to 1 meter where ATM stands for Atmosphere. There are devices that have 50 ATM limits as well and are good for tracking swimming activities.

The increasing affinity towards water-resistant phones is making developers capitalize on the technology they already have. There might soon be devices that have higher limits and can operate for longer and deeper underwater. What do you think about this particular analogy of ours?