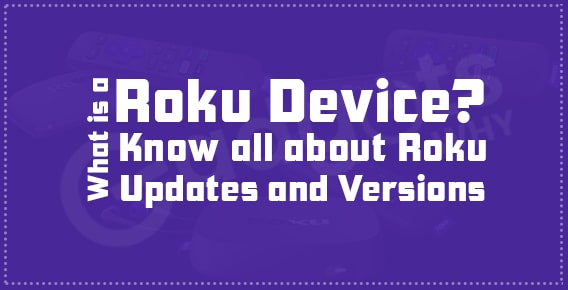 What is a Roku Device? Know all about Roku Updates and Versions

Home » What is a Roku Device? Know all about Roku Updates and Versions

Despite the fact that the first Roku device was released in the late 2000s, your interest in it may have only lately ignited. If that’s the case, you’re probably curious about what Roku is and how it works. This Roku beginner’s guide is designed to provide you with all the knowledge you need about streaming on Roku devices.

We’ll go over everything from what is Roku, how it works to the several Roku device options and even the cost, which varies a lot. You should have a good understanding of everything about Roku by the end of this guide, and we’d be surprised if you haven’t already ordered one.

What is Roku and how does it work?

Basically, Roku is a device that allows you to stream both free and paid video content to your television via the Internet. Netflix, Amazon Prime Video, Hulu, and other TV and movie streaming services download on Roku devices in the same way that apps do on smartphones. While the majority of the content is pre-recorded, sites like Netflix make it possible to watch a lot of it just one day after it first aired on television. Furthermore, apps such as Philo and Sling TV allow users to watch material live as it airs.

While it may appear to be the latest exercise craze to replace Zumba, the “Roku box” (as some refer to it) is the simplest way to stream content to your television. Roku is a little square gadget that connects to your television and allows you to stream movies and TV shows via apps (also called channels.) A Roku TV has all of the capabilities of a Roku incorporated into a high-quality television for those wishing to buy a new one.

How does it work?

Pros and Cons of having a Roku device

Let’s start off with the pros of having a Roku device. Here they are:

Roku gives you access to a huge collection of shows from a variety of streaming platforms.

It’s frequently mentioned while discussing the benefits and drawbacks of owning a Roku TV. When it comes to streaming services, everyone seeks content, and Roku has a lot of it:

and a lot more!

Roku TV can take the place of your satellite or cable television. Follow the latest news from the main networks, or tune in to the Super Bowl and other sporting events!

Roku allows you to listen to your internet playlists in addition to watching videos. There are even podcasts available to listen to while relaxing or studying.

You can use Roku for free if you don’t want to pay for channels. As a result, one of the well-discussed benefits and drawbacks of owning a Roku TV is its price. On Roku’s website, you can even find money-saving suggestions.

You could, for example, use Roku to replace some of your subscriptions. If Roku offers similar capabilities, some of them may be unnecessary.

As previously stated, Roku can be used to replace your cable or satellite TV subscription. Roku’s free channels can also be added to your streaming library.

Roku is popular with Americans because of its simple interface and easy-to-use controls. As a result, they’re constantly highlighted when discussing the benefits and drawbacks of owning a Roku TV. It replaces the traditional remote with the Roku app.

Use your smartphone to type in the channel you want to view, or simply tell it what you want to watch. Similar to Google Chromecast, the Roku software allows you to cast media to your TV.

Furthermore, its private listening capability allows you to listen to music without disturbing others. Plugin your headphones and you’ll have the entire room to yourself. Even better, invite your other three friends to participate via their smartphones.

When everything is on Roku, why keep so many applications and services? You have all of your streaming services in one web location, like a Swiss army knife. Roku can handle music, videos, and other types of material that are generally found on different services.

Even better, Roku TV brings them all together in a single streaming device. You could even use a Roku Express to watch your favorite shows while on the go!

Since we’re talking about the pros and cons of having a Roku TV, we’ll proceed with the cons.

When connected to Wi-Fi, your Roku TV may update automatically, just like any other smartphone app.

It balances the benefits and drawbacks of owning a Roku TV. Updates could make it more stable, improve the user experience, or even introduce new features.

Software upgrades, on the other hand, may contain flaws at times. It’s possible that you won’t be able to use your Roku TV until it’s repaired.

Roku, thankfully, provides troubleshooting instructions for similar issues. You can also speak with one of their agents for further information.

According to the Roku support page, its devices are compatible with any TV that has an HDMI port.

You probably aren’t thinking about this as one of the advantages and disadvantages of owning a Roku TV. After all, HDMI connections are now available on nearly all televisions. You can get the Roku Express Plus if your TV doesn’t have HDMI connectors. Better still, consider replacing your outdated CRT TV with an HDTV.

The following is the retail pricing of each Roku device:

The prices shown above are the suggested retail price. Roku devices are currently available at a lower cost on Amazon. Though you’ll probably need to pay for a few channel subscriptions to enjoy the full experience (especially if you’re canceling your cable), it’s well worth the money because the device is so cheap and you can stop subscriptions at any time. The gadgets are well-liked by users, who find that even the most basic model is more than adequate.