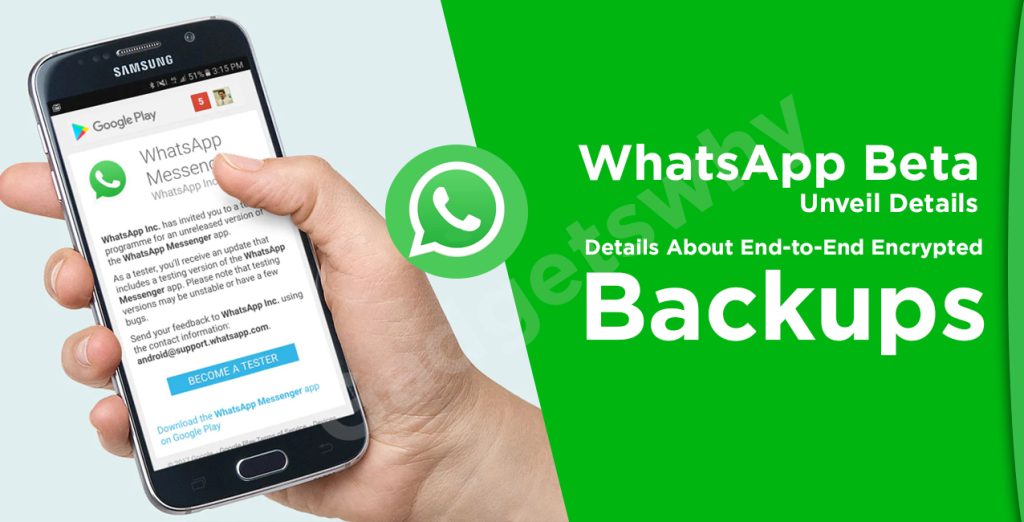 Sometimes or the other, we have come across and/or used the messaging app Whatsapp. There have been numerous additions to the features offered by the messaging platform since its inception. It has had its own share of challenges to face and is still continuing to dominate the Messaging Platform on Mobile phones. Whatsapp has unveiled that it would be rolling out updates for its Beta users with end-to-end encrypted chat backups. According to reports this an attempt to protect the privacy of users throughout the globe. Whatsapp has emphasized privacy being of utmost importance for the developers. They intend to introduce the same as and when stable updates roll out, post the success of the beta program.

Earlier, Whatsapp had given two deadlines for accepting their updated privacy policy. The first deadline was pushed to 15th May, failing which the user’s account would have been terminated. Though Whatsapp didn’t proceed with the account termination, users who haven’t accepted the updated policy can still use major features of the app.

WhatsApp had an end-to-end encryption for chats and calls already. This feature meant that the calls and chats would only be visible to the people who are involved, with no access to a third party not even Whatsapp. This was one of the major privacy concerns for users throughout the world when Whatsapp decided to alter its privacy policy earlier this year.

Whatsapp has introduced this feature for end-to-end encryption with chat backups as well. The latest Beta updates for Whatsapp will have the aforementioned features. This is to be understood that only the users who had signed up as Beta testers for Whatsapp would have that update available on the playstore. The Beta update 2.21.10.2 is expected to have the end-to-end encryption chat backup feature.

According to reports, Whatsapp itself won’t be able to access the chats, calls and backups post the update. The chat backups are associated with the Google drive of user, with the latest update there won’t be any possibilities of unauthorised access to the drive backups of the WhatsApp chats. Whatsapp believes that this addition would help them pacify the privacy concerns users have had since the beginning of the year.

It wasn’t long ago that Whatsapp was facing a lot of flak for its updated privacy policy. According to the updated privacy policy, users had to agree to WhatsApp sharing the user’s data with Facebook. According to the developers, this was done solely to encourage and aid small businesses. They also stated that there won’t be any misuse of the data.

Most users didn’t welcome the updated privacy policy and hence started boycotting the social messaging app. Initially, Whatsapp came up with a deadline to accept the updated privacy policy in February. According to reports: Failing to meet the deadline would have led to termination of the users’ WhatsApp account. Seeing that users didn’t welcome this, the social messaging giant decided to postpone the deadline. Eventually, Whatsapp had to kneel in front of the public.

Amidst all this, people started downloading another social messaging app named Signal. Signal ended up having a 1500% increase in the number of downloads shortly after Whatsapp announced that they’ll be updating their privacy policy. The CEO and founder of Signal assured that the privacy of the users is of utmost importance to them.

It is possible that Whatsapp makes permanent amends to its policies as it has even challenged the Indian government on grounds of privacy concerns. The Indian govt. had asked for traceability of texts so as to identify the source of sensitive or fake messages. Whatsapp legally challenged the court since it felt that this would be a breach of privacy. It is clear that WhatsApp is taking privacy more seriously with the events that took place in the first half of 2021. The update would be available for beta versions initially and the move to regular versions on fixing all bugs.

With the beta update hitting the PlayStore soon, it is being assumed that Whatsapp users would be delighted to find their data and privacy concerns being protected well by the social messaging giant. In case you are a beta user, update WhatsApp now!