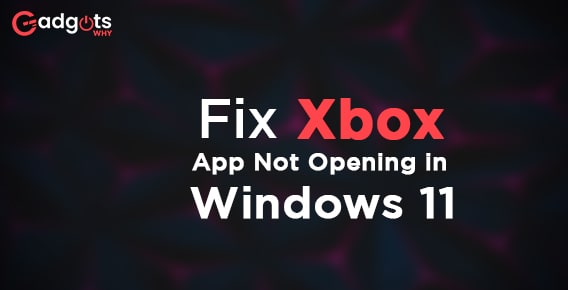 How to Fix Xbox App Not Opening in Windows 11

Home » How to Fix Xbox App Not Opening in Windows 11

Do you have a Windows 11 pc that won’t open the Xbox app? Then go through this guide to the conclusion to learn about all of the troubleshooting options available to you for resolving this problem. If you’re a player, the Xbox app allows you to play your favorite games from the Microsoft Store with your pals. You can post your social media updates, gaming scores, and other things in addition to gaming. Due to a flaw in the Xbox app, it may not open. The problem could be caused by the use of an older version of Windows 11, which would necessitate an update. It’s possible that the OS build you’re using now contains bugs. The Microsoft Store cache could have been clogged with junk data, leading the program to malfunction. This guide includes the fix of Xbox not opening in Windows 11.

Alternatively, it’s possible that your internet connection is poor and occasionally disrupted. Even a virus attack on the Xbox app can cause it to misbehave.

Fix for Xbox not opening Windows 11

You should use the PowerShell utility to reset the Xbox app. All of the technical issues you’re having with the gaming app will be resolved by resetting it.

You could also try restarting your computer. It’s a basic troubleshooting trick that’s helped a lot of people.

Make sure your PC is running the most recent version of Windows 11 while you’re working on the Xbox app. To make it better,

The simple reason why Xbox is becoming unresponsive on your PC is due to a disruption in internet access. So, if it’s possible, switch to another network. To resolve network connection problems, utilize Windows’ troubleshooter tool.

Some gamers claim that changing the locale on their computer helped them get the Xbox software to work. So you may give it a shot.

If the Xbox services on your PC have been disabled in some way, this troubleshooting will work. You may also arrange for the box app’s services to start automatically when the PC starts up.

To have the Xbox services launch automatically when the device starts up, follow these steps.

So, to resolve the issue of the Xbox app not opening on Windows 11 computers, try all of these troubleshooting options. I hope you found this guide useful. Apart from the issue of Xbox not opening n Windows 11, users have considered one another problem regarding this, which is the inability of the Xbox controller to work properly. After updating to Windows 11, many users claimed that their Xbox controller stopped working. The problem appeared to only arise when using the controller with the Steam client in some situations. On both wired and wireless/Bluetooth controllers, the problem has been reported. On a Windows 11 system, the Xbox controller worked occasionally for some users. So let’s see some of the major reasons and solutions as well, in case you are facing this issue.

Solution for Xbox controller not working

There could be various reasons for this issue reported by the users. Some of the reasons are mentioned below. The Xbox controller may stop operating on a Windows 11 PC for a variety of reasons, including-

What can you do to fix the issue?

If the Xbox controller’s firmware is outdated, it may not work on Windows 11 due to a compatibility issue with the operating system.

The problem might be solved by updating the Xbox controller’s firmware. Keep in mind that this solution may not be suitable for people whose PC’s Windows 11 fails to recognize the controller.

There you go with enough amount of solutions for the issue that could arise with your Xbox or Xbox controller while dealing with Windows 11.