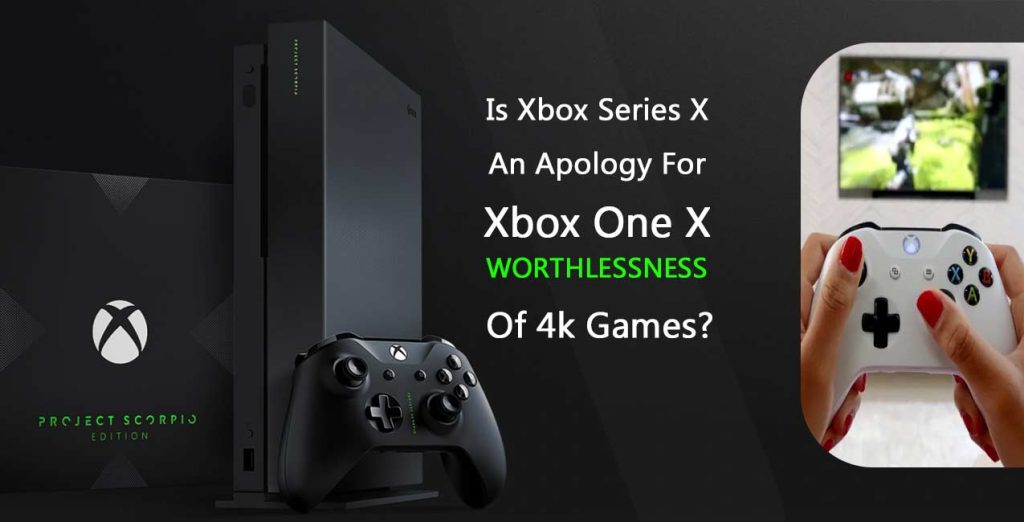 Is Xbox Series X An Apology For Xbox One X Worthlessness Of 4k Games?

Home » Is Xbox Series X An Apology For Xbox One X Worthlessness Of 4k Games?

With the major disappointment of Xbox One X’s performance, Microsoft has tried to course-correct their fault and launched the gaming beast Xbox Series X with powerful features. With this step, it’s quite evident that the Series X is a true apology for the Xbox One X in every way. Considering the price factor Microsoft’s last console Xbox One X was $499, even though it has fewer functions and features compared to the Series X, which is also priced at $499 for a full-fledged device. In the current scenario, Xbox Series X is trending and considered the most powerful gaming console available on the market. Xbox Series X vs Xbox One X evaluates that Microsoft’s next-gen console is capable of higher performance, smoother 120 fps frame rates, far greater visual, and exceptionally fast load times than ever. All thanks to its impressive specifications and unique, tower-like design, you will be now benefited to experience some exclusive features including Quick Resume and better HDR mode, which lets you relish multiple games at a time.

Xbox Series X vs Xbox One X – Differentiate The Specs

When it comes to looking for major specifications of both the gaming console of the same brand, Xbox Series X is the ultimate king. Why do we say this? Check some facts.

Which One is Right For the Games?

With the release of Xbox Series X, the netizens are thrilled enough to play thousands of games across four generations. From now, you can access over 100 games with the Xbox Game Pass in true 1440 p gaming resolution. Isn’t it great? Some of the exciting games that are available now or coming soon to the Series X in the near future.

You can easily play tons of beloved games from the previous Xbox generations on your new-gen console. Also, the nerds will be benefited to upgrade their Xbox One to Series X without any charges.

Home Entertainment For The Best Ever Experience

Both gaming consoles come with a 4K Blu-ray drive and support Dolby Atmos and Dolby Vision. Other than this, all other entertainment services and streaming apps are similar across both. The only thing that may make a huge difference is that the Xbox One X has an HDMI 2.0 output, on the other hand, the Xbox Series X comes with an HDMI 2.1 equivalent. This means, in terms of video output, the One X cannot go above 4K HDR 60fps, while the Series X is capable enough to run 8K 120fps.