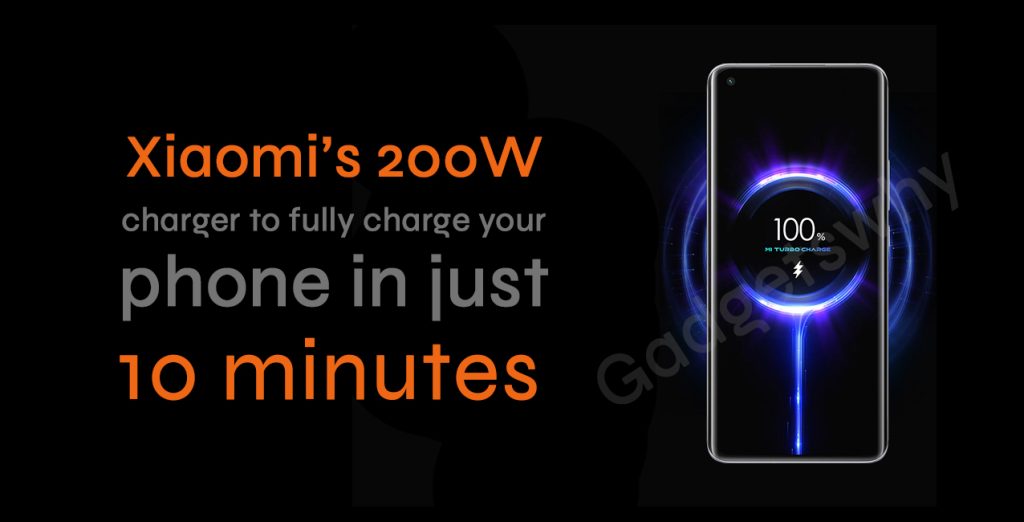 Xiaomi, the global leader when it comes to smartphone brands, is at the top for a reason. The commitment they have given for the development of high-tech budget phones is commendable. With its recent announcement, it has taken the complete gadget world by storm. Xiaomi recently announced that the company is all set to introduce a 200W charger that would fully charge your phone in just 10 minutes.

The frequency at which Xiaomi launches newer and better versions of its products speaks for its popularity in itself. In the past few years Xiaomi has catered well to the needs of its users, the newest addition to that list is simply mind-boggling. In a recent video uploaded to twitter, Xiaomi showcased what is being called the “Future of phone charging”. Let us take a deeper look at Xiaomi’s latest venture.

Xiaomi has given a befitting name to its latest announcement. The 200W wired version of the “Hypercharge” takes just 10 minutes to charge a standard 4000mAh battery. There is a wireless version as well which charges the same battery in less than 15 minutes.

Xiaomi mentioned that it has been practically tested on working phones and the results have literally been recorded as well. The smartphone tycoons carried out their trials with specially engineered phones like the Mi 11 pro.

Xiaomi’s analysis shows that a phone on 0% battery would take only 44 seconds to get to 10% with the help of this charger. The charger takes somewhere around 3 minutes and 20 seconds to hit 50% while the exact duration for charging the same phone to 100% is 7 minutes and 57 seconds.

The wireless counterpart of the Xiaomi 200W charger is almost as efficient as the former. The tests have proven that the literal lightning fast charging is here to make a statement. This kinda speed is something that the smartphone industry hasn’t quite witnessed before. Not only does this set the tone for the future of charging but also opens up avenues for Xiaomi itself.

The developers at Xiaomi teased the 200W charger with a tweet which gave a brief idea about the charging speed and capacity. The tweet was enough to get the tech world to talk extensively about Xiomi’s endeavour. It is quite evident that Xiaomi has stirred up a storm with the latest announcement they have made. The future of the Chinese Smartphone giants seems pretty sorted and bright.

It is a no-brainer that Xiaomi has elaborate plans already in place for the future of its low-end and flagship phones. With the smartphone tycoons already in control of the majority of the budget smartphone market, it is quite intriguing to see them come up with better technology consistently. The foundation of these plans had been laid with the combination of fast charging and long battery life phones like Mi 10i. The Mi 11 was tested for charging speed, hence it is safe to assume that the 200W charger would be hitting stores post all-out unveil of Mi11.

Xiaomi believes that the fast paced contemporary world would be aided to large extents with their product. Charging at high speeds is something all of us prefer and Xiaomi is not only bringing it to its flagship phones but bringing it soon. The Mi 11 has some of the most promising specs. And to top it all up, it will most probably be succeeded by the hefty 200W hypercharge charging unit which would make it a sure shot giant in the field of smartphones.

Earlier dash charging and superfast charging have proven to be a great means of boosting sales of brands like OnePlus and Samsung. The 200W counterpart that Xiaomi is set to introduce will surely set the tone for their further success. It should be noted that no company has even come close to the feat Xiaomi has achieved. The likely release of the hypercharge by Xiaomi would open avenues for both the smartphone industry along with the smartphone giants themselves.

Xiaomi has always looked out for its customers and perhaps that is the reason behind its success over the years. Not only have they made it clear that customer retention is their foremost priority, but they have also shown the passion to bring something new for them. This approach of theirs has been something that other smartphone giants have been worried about. Presently, there has been no news from Samsung, OnePlus or subsequent smartphone brands to tackle Xiaomi’s announcement, but one can expect other tycoons to pitch in soon.

Xiaomi’s 200W charger has raised a lot of eyebrows and has also made many fans getting impatient already. With Xiaomi yet to announce the date for its launch, what do you think will be the best modus operandi?