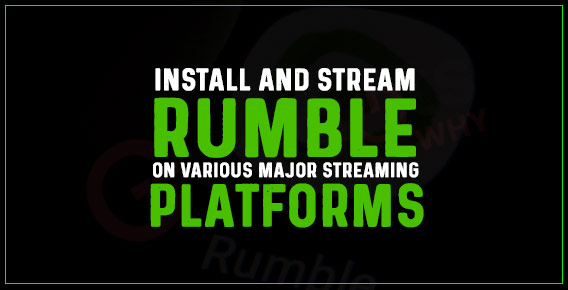 Rumble is a free video-sharing network with over 250,000 creators and channels to choose from. Rumble was created in 2013 and is headquartered in Toronto, Canada. It focuses heavily on breaking news and viral videos. It’s the place to go for all things video. People love to stream Rumble as it is known to be the video game of the future. Rumble claims to be able to monetize videos better than the popular YouTube platform. It can be found in over 150 countries. Rumble is available on a variety of platforms, including Roku, Firestick, Apple TV, and others.

In this article, we are going to let you know how you can install and access amazing content available on the Rumble platform, via your preferred streaming device. So, without any further ado, let’s begin!

Rumble, based in Toronto, is a Canadian internet video platform. Chris Pavlovski, a Canadian technology entrepreneur, created it in 2013. Since July 2020, Rumble’s monthly user count has risen rapidly, from 1.6 million in July 2020 to 31.9 million by the end of the first quarter of 2021. The site is popular among right-wing Americans.

Rumble’s content during the first seven years was primarily viral videos and news from conventional media sources, as well as footage of children and animals. Representative Devin Nunes, on the other hand, criticized YouTube for being extremely censorious of his channel and began publishing his videos on Rumble in August 2020. Dinesh D’Souza, Sean Hannity, and Representative Jim Jordan were among the first to speak out. On June 26, 2021, former US President Donald Trump joined Rumble in preparation for recording his Ohio campaign event. The site is popular among right-wing Americans.

Rumble receives a lot of traffic from Parler. Researchers examining conspiracy theories and misinformation regarding COVID-19 used data from February 2021 to discover that numerous video creators found a receptive audience on Rumble after their creations were removed from YouTube or Facebook. Del Bigtree, Sherri Tenpenny, and Simone Gold are among them. “Pavlovski has recently become more vociferous in accusing Big Tech of censorship and now actively courts prominent conservatives and intellectual dark web individuals to join Rumble,” according to a June 2021 piece in Slate.

Some amazing features of the Rumble Channel!

The Rumble channel has the following features:

How to Stream Rumble on your preferred streaming device?

The Rumble app is now available on the Roku Channel Store. To watch Rumble on Roku, follow the steps below.

Your Roku device will now have the Rumble channel installed. Stream amazing content available on it right away!

Follow these steps to install the Rumble app on your Amazon Fire TV:

After you complete the above mentioned steps successfully, you will be able to stream the Rumble app on your Amazon FireStick.

The following are the steps to enable DIY NETWORK on your Apple TV device:

Once you’ve completed these steps successfully you may now access the Rumble app on your Apple TV.

What is the purpose of the Rumble app?

Users of Rumble can enter a daily cash drawing by voting on videos and earning tickets by swiping left or right. The more tickets a user owns, the more entries he or she can make in the cash drawing. Pornography, harassment, racism, antisemitism, copyright infringement, and unlawful content are all prohibited on the network.

Is there an iOS app for Rumble?

Rumble is now accessible on both iOS and Android platforms. If you have an iOS device, you can get the Rumble app from the Apple App Store.

Is it possible to watch rumble on my smart TV?

Rumble TV is a web-based platform that allows you to stream your workouts from any computer or mobile device.

Is the Rumble app for iPhone free?

On Rumble, how do you make money?

There’s a different method to generate money with Rumble. Users will be able to earn $0.25 per day simply by tagging videos. At a fee of $0.05 per video, they can perform a maximum of 5 videos every day. There are a few additional items people can freely explore, as seen on the Rumble official website.

Rumble is available on which platforms?

After a 30-day free trial, Rumble is now available to stream with a Paramount Plus membership for $4.99 per month.

Is it possible to install the Rumble app on my Smart TV?

Rumble TV is a web-based platform for streaming workouts from any computer or mobile device. In our comprehensive STREAMING GUIDE HERE, learn how to cast to your TV through Airplay, HDMI cable, or directly from a Smart TV.

Is Rumble compatible with the Firestick?

Is it possible to utilize Chromecast with Rumble?

Note: Using Chromecast to stream your Rumble TV workout is not recommended. Your workout will be cast without Rumble music due to Google constraints (and what’s the fun in that?).

How can I get third-party apps to work on my Chromecast?

To begin, open the app on your Chromecast, select Browse files, navigate to the Download directory, select the APK you transferred in step 3, and then click Install package > Install app > Install.

Is there a Rumble app for Apple TV?

Rumble is an App Store game that may be downloaded. This app is only available for iPhone, iPad, and Apple TV on the App Store.

Who is the Rumble app’s owner?

It was founded in October of 2013 by Chris Pavlovski, a Canadian technology entrepreneur. The website is well-liked among right-wing Americans. Rumble prides itself on being “unaffected by cancellation culture.” Rumble will receive 150 million visitors in 2022, according to analytics firm Similarweb.

What is the price of the Rumble app?

The final price may differ. The monthly cost of Rumble starts at $99.00. A free version is available. Rumble provides a free trial period.

What exactly is the distinction between Rumble and YouTube?

After YouTube, Rumble is the second-best video-sharing platform. It attracts a lot of creators who give Rumble a range of channels because of its unique monetization mechanism. Without advertisements or subscriptions, you can also watch the newest news, viral, entertainment, finance, sports, and science videos. You can view all of your favorite videos on your preferred streaming device with the Rumble app. Thanks for reading!