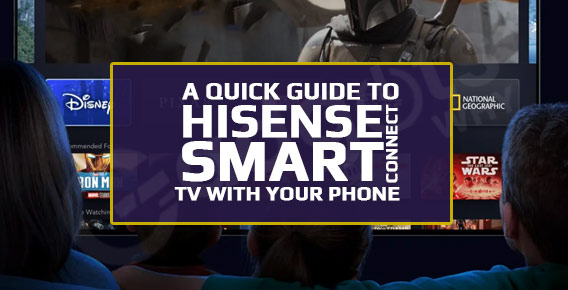 A Quick Guide To Connect Hisense Smart TV with your Phone

Hisense Smart TV is one of the top cheap Smart TVs on the market, featuring high-quality visuals and a great viewing experience. It gives high-quality photos, images, pictures, videos, movies, and other visual information in a variety of graphics screen resolutions, including 4K, Full HD, and HD. Hisense TV also has a screencasting feature that allows you to connect iPhone, iPad, and Android smartphones and tablets to view content. Are you perplexed by the numerous possibilities for connecting mobile devices to your Hisense TV? We’ll walk you through connecting your Hisense Smart TV to your Android or an iOS smartphone in this article. Let’s get started on how to Connect Hisense Smart Tv to phone!

Hisense Group, based in Qingdao, Shandong Province, China, is a Chinese multinational white goods and electronics producer. In 1969, it began making radios.

Hisense’s main products are televisions; their first model, the CJD18, was released in 1978, and the company has been the top TV producer in China by market share since 2004. Hisense developed a transparent 3D television in 2013. It unveiled the world’s first real 8K 10 bit HDR screen TV in 2020, which is based on an AI-powered HDR algorithm and an image quality engine with 6.5T of supercomputing capacity. Hisense sells items under the Hisense, Toshiba, Gorenje, Sharp, Kelon, and Ronshen brand names.

Because Hisense is also an OEM, several of its products are offered to other firms under different brand names.

In 1969, the company was started as Qingdao No. 2 Radio Factory, and in 1992, radio engineer Zhou Houjian rebuilt it into Hisense. Hisense Visual Technology (SSE: 600060) and Hisense H.A. are two key subsidiaries of the Hisense Group that are publicly traded (SEHK: 921, SZSE: 000921). Before the end of 2020, both companies had more than 30% state ownership through the Hisense holding company.

Connect your smartphone (Android/iOS) to your Hisense TV – Here’s How!

It’s easy to connect an Android handset to a Hisense Smart TV using Anyview Cast; all you have to do is enable “Anyview Cast” in your Smart TV’s settings. Here are the simple ways to connect Hisense TV to Android devices from start to finish.

(Note: Before connecting your Android device to the Internet, make sure your Hisense TV is linked to the same Wi-Fi network as your computer.)

Now you may cast your Android screen to your Hisense Smart TV. On the huge screen of your TV, you can now watch movies, play games, and more. You may also stop casting from the notification tray on your Android at any moment. Simply remove it, tap the message that says Casting screen, and then tap Disconnect.

Mirroring the iPhone screen to a Hisense TV can be done in a variety of ways. Here’s how to use an HDMI-to-Lightning adaptor to connect a Hisense TV to an iPhone.

A: Overall, this is a good-looking, low-cost television that we recommend. Review of the Hisense R8F 4K ULED TV: Hisense’s ULED technology is integrated into a Roku TV, resulting in improved brightness, contrast, color, and motion management.

Q. TCL or Hisense: which is better?

A: The Hisense H8C is superior to the TCL US5800 in terms of picture quality. Deeper blacks, higher peak brightness, better reflection handling, better motion handling, HDR compatibility, and somewhat better built-in speakers are all advantages. The TCL, on the other hand, employs Roku’s smart interface, which has a large number of apps and is simple to use.

Q. How does the Screen Sharing App function?

A: When your screencast device is connected to your WIFI, it links both devices and allows your Hisense smart TV to cast. You can mirror and cast your Android mobile screen to Hisense smart tv using the screencast program, which allows other devices to connect.

Q. Is Hisense TV equipped with a smart cast feature?

A: The AirBeamTV Screen Mirroring for Hisense TV app is compatible with a wide range of laptops and desktop computers.

A: The Chromecast capability is built-in to the majority of newer models, allowing you to cast your mobile device without having to buy a Chromecast device or bother with any additional gadgets. However, some older Hisense TV models do not have Chromecast built-in.

So there you have it: a quick and easy guide to connect your Android/iPhone/iPad screen to your Hisense TV and use it in real-time. The family can have a good time watching slideshows and watching their favorite videos on their smartphone using these. Thanks for reading.