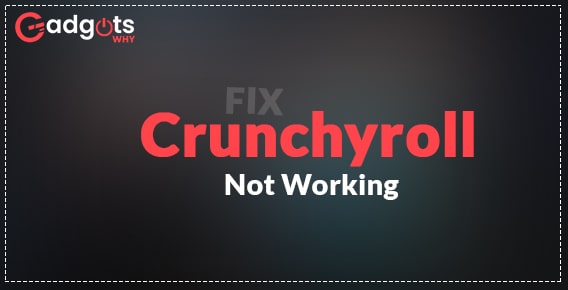 How to Fix Crunchyroll not Working on Roku?

Home » How to Fix Crunchyroll not Working on Roku?

When it comes to watching content then anime has been a pillar of great entertainment. It offers a very quality experience with the best in the best of content in all the possible genres. If you are an anime watcher then you must be a user of the Crunchyroll app. Many users of Roku prefer this app for watching their favorite anime. While being a very good app on a very good streaming device, every piece of technology comes across with some other problems every now and then. In the case of Crunchyroll, many users have complained that it is not working on Roku and in this article, we will talk about just that. So read ahead to get the best solutions to Crunchyroll Not Working Error on Roku.

How would you solve the Crunchyroll Not Working Error on Roku?

If you have Crunchyroll downloaded on your device and you are facing the Crunchyroll error then we will be letting you know the solution in this part. Crunchyroll Error could have appeared on your Roku device because of various different reasons. Don’t worry, there are actually many ways of improving this, all of them are below in detail.

You can directly solve this error by restarting your Roku device. For using this method just follow these steps:

You can also restart the home network by following these steps to solve the problem:

3. Removing the channel from the Roku home screen

You can also try removing Crunchyroll from Roku by the following steps.

Alternatives to Crunchyroll on Roku

If none of these ways works then you can actually try any of these other apps which are as feature-rich as Crunchyroll and offer a wide range of anime content.

HIDIVE is another anime streaming service that gives you an inexpensive plan that is cheaper than Crunchyroll, that too with a longer free trial.  You will be able to try HIDIVE Premium free for 30 days, after which you just have to pay $4.99 per month for ad-free access for exclusive content and dubs. You might check the main website for updated pricing information though. HIDIVE has a great selection of dubbed content, series, simulcast, and movies. You have to keep in mind that though HIDIVE is only half of the price of VRV, a VRV subscription includes the HIDIVE content also. Therefore, if you are ready to pay double the price, you will get access to a lot more content.

Crunchyroll is presently a WarnerMedia company through Otter Media. It claims to be the world’s most popular anime brand. It connects the fans of anime and manga from 200+ countries and areas with 360-degree experiences. Fans get access to the largest collection of licensed anime shows and movies through the Crunchyroll channel. Anime Digital Network works in partnership with Citel which is a subsidiary of Média-Participations, and Anime on Demand video streaming services that translate in different languages for watchers worldwide. Users can also get access to simulcasts of the top series that are available immediately after the Japanese broadcast. Crunchyroll’s services now also extend to the licensing of TV, home video, theatrical, and consumer product rights. Fans can engage further with events which include events like Crunchyroll Expo,  KAZÉ Movie Nights, Crunchyroll Movie Nights, Anime Awards owned by Crunchyroll, consumer products via eCommerce and retail partners that include Crunchyroll, KAZÉ (France, Germany), AV Visionen), Crunchyroll Manga app, Crunchyroll Manga Store), Crunchyroll Games, KAZÉ Games, and manga (KAZÉ Manga (France, Germany).

Crunchyroll was established in 2006 and is presently headquartered in the city of San Francisco. It also has regional offices in Los Angeles, Paris, Lausanne, Berlin (AV Visionen), Tokyo, and Chisinau (Ellation). VRV  based in the United States and Eye See Movies (Germany) are also brands owned by Crunchyroll.