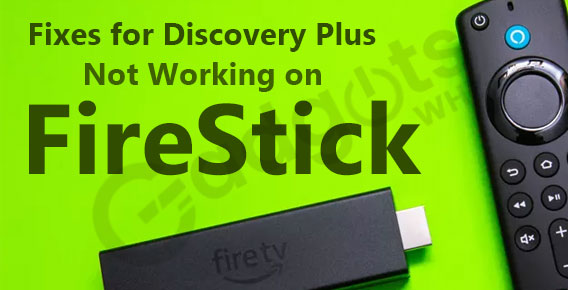 Fix “Discovery Plus Not Working” on Your Amazon Fire TV – Here’s how!

Home » Fix “Discovery Plus Not Working” on Your Amazon Fire TV – Here’s how!

Discovery Plus is a subscription-based content service that has a distinct niche in the world of infotainment. Discovery Plus has it all, whether it’s science documentaries or interesting themes about the Universe and blackholes. It is accessible on Xbox, Apple TV, Roku, and Fire TV, among other platforms. Discovery Plus, like any other streaming service, is subject to occasional faults and difficulties. Discovery Plus not working or crashing on Amazon Fire TV devices is one such issue that users have lately experienced. The major cause of this could be anything from poor internet connectivity to software glitches, a minor technical glitch, or even server downtime due to Discovery Plus team maintenance.

No streaming platform is immune to bugs and difficulties, especially in the early stages. But don’t panic; here are some troubleshooting tips for your Fire TV devices to resolve this issue.

Why Discovery Plus isn’t working on my Fire TV?

Some of the most common causes of Discovery Plus streaming issues are mentioned above. Now, without further ado, let’s jump right into the next section that discusses the troubleshooting processes for the same.

There are a number of solutions that can be used to fix Discovery Plus Crashing. It’s possible that the problem is within the app, the linked network, or the streaming device. As a result, we’ll go over different methods for resolving this problem on the Fire TV Stick.

Users should reboot their media streaming devices before making any changes. In order for the devices to appropriately reply to the queries needed to launch Discovery Plus. Also, while your streaming devices are restarting, reset your Wi-Fi router to see if it solves the problem.

To restart your Fire TV device from the menu:

Discovery Plus necessitates a high-speed internet connection that is also stable. Discovery Plus will not work if it is too slow or sporadic. Check your connection by loading a web page or use another streaming service to see whether it’s working, and if it’s fast enough by using a speed test service.

The following speeds are recommended by Discovery Plus:

2. Update the Discovery Plus app

Apps like Discovery+, are usually updated automatically. Users, however, are unable to take advantage of this service due to a system flaw. Individuals must manually update the apps in this circumstance in order to take use of the improved services. Follow these procedures to upgrade Discovery Plus on your Fire TV devices:

Doing this will update the Discovery Plus app on your Fire TV devices.

Since Amazon releases new software versions often, it’s a good idea to check for updates and install them manually. It’s not difficult to do this. Simply follow the steps outlined below.

(Warning: During the update, do not unhook the power cable.)

Discovery+ broadcasts original programming, including spin-offs from Discovery’s networks. [15] It also offers a sneak peek at Magnolia Network, an impending DIY Network relaunch led by Chip and Joanna Gaines of the HGTV show Fixer Upper, as well as preview specials and the debut episodes of ten of the network’s original shows.

HGTV, Food Network, TLC, Investigation Discovery, Asian Food Network, Animal Planet, Travel Channel, and Discovery Channel all have Discovery+ subscriptions that allow them to stream their shows. They also have exclusives and material from Discovery’s other properties, which varies by country.

As part of a licence arrangement, Discovery+ also carries a selection of programmes from A&E Networks’ A&E, Lifetime, and History in the United States.

Hopefully, the Discovery Plus app on the Fire TV Stick is now working properly for you. If you continue to have problems, please let us know in the comments box and we will consider. Thanks for reading the article!

Why is Discovery Plus not on my television?

Consider the following suggestions if you’re experiencing problems with our Android TV app: Restart the app after closing it. Remove the programme from your device and reinstall it from the Google Play Store. Turn your TV on and off by unplugging it from the power supply; leaving it on standby may not be sufficient.

Is Amazon Fire TV compatible with Discovery Plus?

Discovery Plus has been the most popular streaming service since the launch of the preceding one. And the answer is yes, you can watch Discovery Plus on your Amazon Fire TV. Discovery Plus is accessible on all Fire TV devices, including Amazon’s phenomenally popular Fire sticks and cubes.

How should I keep my Discovery Plus TV up to date?

To check for updates, go to the Settings menu on your Samsung smart TV. Support is a viable alternative. Then click on Software Update. Update Now is the time to make a decision.

Is Amazon selling Discovery Plus?

Customers who have Amazon Prime Video can now add Discovery+ as an extra subscription to their Channels service.

What’s the matter with my Discovery Plus app constantly crashing?

How can I watch Discovery Plus the best?

Discover Plus can be found at discoveryplus.com or by downloading the Discovery Plus app. This streaming service is compatible with Apple TV, Android TV, Roku, Amazon Fire TV, Samsung Smart TVs, Xbox consoles, Chromecast, and a number of web browsers.

Is Discovery Plus free for Amazon Prime members?

Previously available only on Amazon Fire TV, Prime members may now purchase, manage, and enjoy Discovery+ subscriptions through their Prime Video account. Channels currently only offers the ad-free version of Discovery+ for $6.99 per month.

What exactly is Discovery Plus?

If you want to watch many Discovery Plus channels on DirecTV, this is the place to go. Other satellite television platforms that carry Discovery include Verizon FiOS Channel 120 (SD) and Channel 620. Dish Network HD Channel 182 (HD).

Is a Discovery Plus app available?

The Discovery Plus app is compatible with the majority of major streaming devices and platforms, including Android phones and tablets. Android TV is a set-top box that runs the Android operating system.

Why is Discovery Plus constantly crashing on my television?