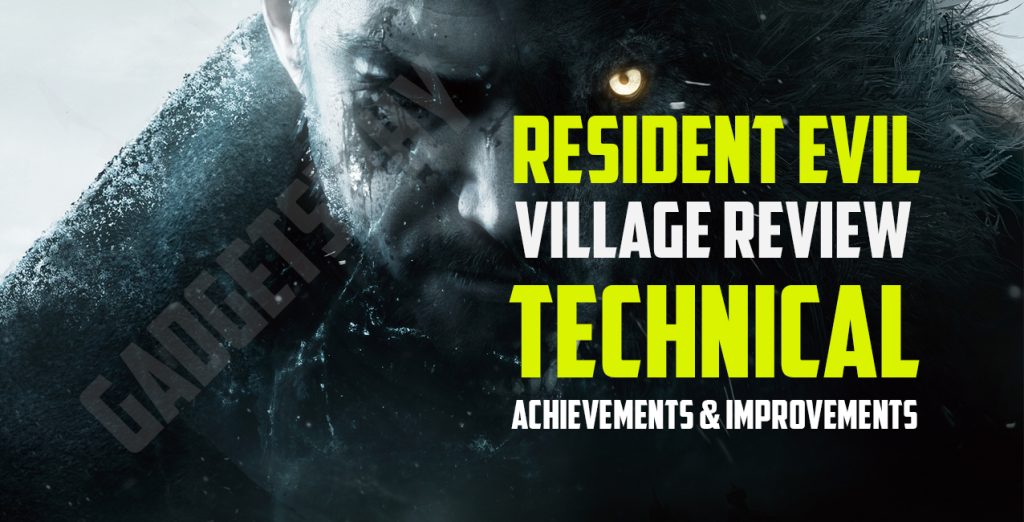 “Come here you disgusting man-thing” is an actual one-liner said by the antagonist that sets off an unsettling chain of events. Lady Dimitrescue bending below the doorways, zig-zagging through the hallways is an unsettling sight to witness but gives major adrenaline as we become familiar with the gothic atmosphere.

Yes, we are rolling on another fantastic review for our elite gamers. With fewer scares and even more guns, the Resident Evil Village review is one of the most interesting reviews we have done yet! So read further to take control over the game’s advancements, technical achievements, and improvements.

Over the last 25 years, the Resident Evil franchise has been subjected to continuous change as Capcom tried several different mixes of horror and action gameplay. But everything changed when Capcom swung for the fences in Resident Evil 7 with a classic first-person perspective and more-classic horror focused gameplay. Resident Evil Village, being its sequel, originated from an idea of something completely different while still being as engaging and fun.

Although the perspective and underpinnings are mostly the same, Resident Evil Village branches out into its direction earlier in the game. Thus, perfectly capturing everything great about that game while carefully jostling around the edges, fearing not to tread on the same path. While still gothic and frightening to play, Resident Evil Village factors a more action-packed track with the same formula.

What makes it stand out amongst its counterparts?

When not shooting the kneecaps off of Mother Miranda’s servants and stress-inducing “what is going on here?” To get through the turmoils of this game, depending on your intellect will only help. The classic Resident Evil horror flix puzzles around both in the castle and below, with strikingly familiar key puzzles bulking out at the early hours of the game. Later statue-turning conundrums soak up the brain-time as you are busy matching the floor patterns to cryptic passages in a mysterious poem.

It’s heartening to see the studio returning to the classic DNA of the series with Resident Evil Village; the mix of obscure dark settings coupled with a sharp focus on surviving combat rather than shotgunning through the hordes feels like a return to its former glory.

Behind everything you witness is a thick layer of suspense and an unsettling peculiarity. The village is a dark gotch landscape of snow-covered huts and homes, each one scarred to tell a different story, whether that’s the burnt-out living room or holed and splintered wooden wall we need to escape through.

Light is subtly used to evoke different emotions as you play the game. The village streets are starkly white with snow and the castle’s cellar is a dimly lit labyrinth teasing hidden dangers. While upstairs in Lady’s room, the gleaming panels render a sense of luxury that sits well with our discomfort.

The cast of villains is one of Capcom’s finest cabals of evil to date and goes some way towards being one of the creepiest creatures in the lineup since Bloodborne. In combat, each villain behaves in unique ways, and you need to out-think as much as you out-fight them. The game cleverly uses the environment(awfully calm at first) to induce horror elements. Like the consistent thread of Lady’s daughters chasing you in a very odd game of cat and mouse.

Resident Evil Village, a sequel to RE7, showcases finesse image quality, ray tracing enhancements, and intricate tracking for the upcoming generations of consoles all captured neatly in a multi-dynamic boost in the scene and scale complexity. The imagery feels like a web of spiders cobbled up together in an exquisite marriage of technology and art. RE engine might be the brainpower but it’s the art team within Capcom that steals the show.

The mid-field objects connecting the back and foreground mixed with the distant background to lend the world a sense of scale forms together to make the striking exteriors. The subtle mix of volumetrics and in-direct lighting is of paramount importance to render a natural appearance around characters, especially during the game’s gloomy moments.

The character animation and detailed engine capture the eye and body movement perfectly during action scenes while maintaining stability while running through the corridors.

The ray-tracing support(although a bit nascent) is intriguing to pursue and successfully removes the white outline halos. RE has also improved on its realistic light bounce which is effective.

Do Not Miss: The Exomecha Loadout

What can be improved?

Building on the gothic tales of the past fused with dark character elements and isolated places, Resident Evil Villages’ whiplash action is horror at first but becomes a little predictable as we march forward through the game. Capcom seems to be working too hard to throw us off balance by its off-putting dark tones but is restricted enough to make its shocking moments limiting.

The protagonist who seemed isolated and unaided at first suddenly possesses the cheat to never run out of bullets. You are not sweating, as our friend Duke lets you upgrade weapons and sell trinkets. While shooting an enemy’s head off with a shotgun feels good, the flawed aiming of the weapons will give mechanical torture dreams.

Resident Evil Village suffers from bland characters at moments who don’t add anything or add real tension. Seeing Lady Dimitrescu peeking through becomes less distracting and terrifying, and you might start to eye-roll after some time.

All we can say at the end of the Resident Evil Village review, that the franchise has successfully established its name in the industry again after the likes of games like Resident Evil 6 got heavy criticism for focusing too much on action-packed scenes and less on its traditional horror element. You might feel a bit ordained or bored at times because of continuous chasing and brooding music. But the game lives up to the hype and renders a stiff sense of achievement after cutting through the many great linings of puzzles and several remarkable hallways. The characters are intriguing and oftentimes simply terrifying- something essential that makes this game great!

Resident Evil Village strives to be more than a technical showcase or a nod to the past. Any sense of overfamiliarity is trumped by the intriguing cast of villains and the constant tease of characters from the past game. To borrow a quote from our protagonist, we are constantly asking ourselves what the hell is going on- but in a good way!