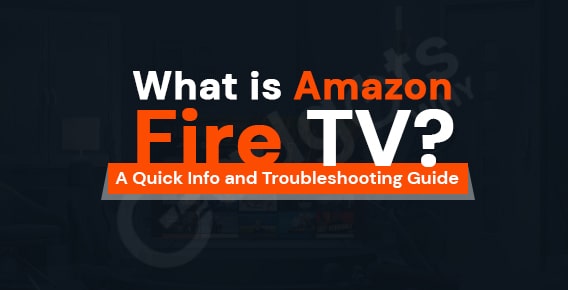 What is Fire TV by Amazon? A quick TroubleShooting Guide

Home » What is Fire TV by Amazon? A quick TroubleShooting Guide

Amazon Fire TV is a video streaming device that connects to a television or monitor and allows you to view TV shows and movies from apps such as Netflix, Hulu, Amazon Prime, and tens of thousands more.

Amazon first debuted the Fire TV in 2014, and since then, it has released several additional models.

Everything you need to know about the Amazon Fire TV is covered in this article. Read on!

Amazon Fire TV is a line of digital media players and micro consoles that Amazon has developed. The devices are small network gadgets that broadcast digital audio and video content to a connected high-definition television via the Internet. Users can also use the provided remote control or another game controller, or a mobile app remote control on another device, to access local content and play video games.

On April 2, 2014, Amazon revealed the first-generation Fire TV gadget. Additional Fire TV devices have been released on a regular basis since the second-generation version was released in 2015.

What can you do with Amazon Fire TV?

Fire TV, like any other streaming media player, is an entertainment device that connects to the internet to provide access to a wide range of material, including free and subscription movies and TV series, as well as music and games.

The major purpose of Fire TV, and without a doubt the main reason most people buy one, is to watch TV shows and movies online. That means you can access a slew of streaming services, like Netflix, YouTube, Hulu, HBO Max, Disney+, and a slew of others, including Amazon’s own Prime Video.

You can watch content from practically every streaming service, including free services like PlutoTV and Tubi, on the Fire TV. However, Amazon Fire TV is capable of much more than just watching TV and movies. It can also play music. You can listen to music on-demand, radio stations, and podcasts using apps like Spotify, Pandora, iHeartRadio, and Sirius XM.

It is also, in some ways, a gaming system. You may play a wide variety of games on Fire TV. Candy Crush Saga, a modern version of Pac-Man, and GTA Street Fighter are among the games available. Some games can be played with the Fire TV remote, but you’ll want to add an optional gaming controller/console for a more enjoyable gaming experience.

How to get started with the Amazon Fire TV?

Setting up the Fire TV models is essentially the same as setting up any other streaming media player:

Congratulations. You may now watch amazing content on your Fire TV!

There is no such thing as an infallible device. This section walks you through 3 of the most common troubleshooting techniques on your Fire TV.

There are three options for restarting a Fire TV device-connected TV or a Fire TV Edition Smart TV:

The steps to check for and install Fire OS updates are as follows:

Interesting Read: Is Alexa eavesdropping on you?

Using the reset button on your Fire TV device

Restarting or upgrading the gadget will not solve your problem if it is especially vexing. In that situation, you’ll need to reboot your Fire TV device, which is a very extreme procedure. This method is described as “drastic” since it requires you to go through the setup process all over again, so take this route only if restarting and updating your device does not resolve the issue.

Depending on your device, you can conduct the reset in one of the following ways:

It’s simple to solve if your existing remote won’t pair with your Fire TV device (Most of the users encounter this issue during a battery change). For five to ten seconds, press and hold the home button (the one with the house icon, of course). That generally solves the problem. This is also how brand-new remotes or game controllers are paired. Of course, they must work with the Fire TV.

The newest Amazon Fire TV is a streaming media hub that is just as competent as the previous, with the addition of 4K video and enhanced voice search using Alexa. Unless you have a 4K-capable HDTV, you won’t notice the change from the first Fire TV, but a multitude of features and a very affordable $100 price tag easily win it our Editors’ Choice.

Have you ever used an Amazon Fire TV or a similar streaming device? Did it live up to your expectations, or did you wish for more? Please share your thoughts in the comments section below, and as always, thank you for reading.